Irish knock off Robert Morris in opening round 93-42 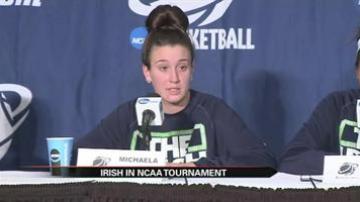 TOLEDO, Ohio-- The Fighting Irish opened up the first round of the NCAA women's basketball tournament with a blowout Saturday against Robert Morris. Irish guard Michaela Mabrey came off the bench and led the team with 16 points.

“Michaela was really, really critical today coming off the bench, she’s always ready to shoot the ball and shot it extremely well. I think the zone gave her some good looks and she was ready to take them,” Head Coach Muffet McGraw said.

Mabrey says the team has been practicing against one another the last few days rather than a practice squad. And it paid off.

On the defensive side of the ball, the Irish held off Robert Morris' lead scorer, Artimes Spanou, to just seven points.

“I was really happy with the job we did on Spanou. She’s a great player and we were able to force her into some turnovers and hold her to single digits, which I thought was a really good accomplishment for us,” McGraw said.

And to seal the deal on the 93-42 win over Robert Morris, the Irish shot just over 59 percent in the field, and were 10 for 18 from behind the three-point arc.

“I think it’s really key for us to shoot the ball well from the perimeter and fortunately we’ve done that pretty much the whole season especially from the three-point line because it really extends the defense and it’s going to open up things inside for our post players,” McGraw said.

The Fighting Irish will move on to play in the second round of the NCAA tournament against nine-seeded Arizona State on Monday at 6:30 in Toledo.