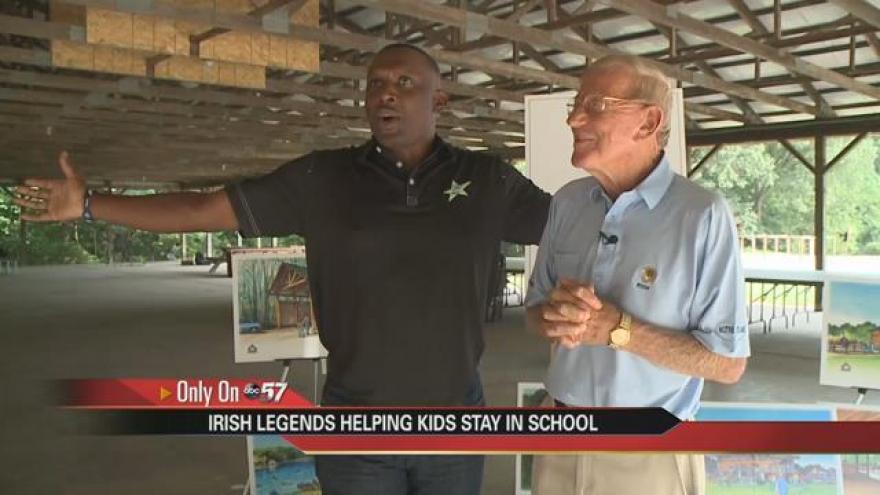 Two Irish football legends are coming together to tackle the issue of middle school students dropping out of school.

On Monday the Five Star Golf Open will be held at Warren Golf Course at Notre Dame to raise money for the non-profit.

Holtz said, “He was all American, won the Heisman, set the groundwork for a national championship team, drafted in the first round, all pro, played in the Superbowl, and now he’s going to the hall of fame! That’s a pretty good resume to have, but that’s not what makes him special!”

Holtz and Brown took a tour of the Summit in Union, Michigan on Sunday. They hope this area will develop into a camp that develops at-risk teens into leaders.

So far the non-profit has programs in 15 schools across the country.

Tim Brown said Holtz was instrumental in his mental development.

Holtz said, "It was relaxation! So you could go through mentally what you’d do in the game.”

Brown said he hopes to get more schools signed up for the league.

Brown said, “I believe that this is a platform that God has given me. I believe all these Heisman’s and pro-bowls, hall of fames, and all that kind of stuff is for me to be able to go back and do this kind of stuff.”

As a board member, Brown said he looks forward to growing the organization nationally.

Brown said, “They’re not being made to do anything, they’re not being held accountable for anything that they’re doing. They’re just able to live life anyway that they want to. And Five Star is not going to allow them to do that.”

For more information you can visit their website http://www.fivestarlife.org/