Irish look to finish the regular season off right despite injuries 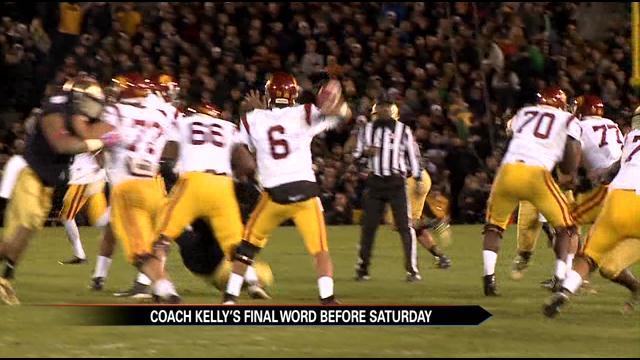 The Fighting Irish will hit the gridiron for the final regular season game this Saturday against their historic rival, the University of Southern California Trojans.

And on top of academic issues and injuries that have burdened the Irish this season, the team got news of two more guys out for the season Tuesday, along with team captain and defensive lineman Sheldon Day who won't play this week against USC.

“Jarron Jones is out for the year he has a listfranc,” Irish head coach Brian Kelly said Tuesday.

Notre Dame has been plagued with injuries this season.

“Sheldon had his second PRP, he will not be available this week...Drue Tranquill tore his ACL in the game so we've lost him for the year,” Kelly said.

And injuries have been the story as the Fighting Irish struggle to wrap up a somewhat disappointing second half of the season this week against 7-4 USC.

“It'll be a great match up. Two teams that are coming off of disappointing losses that want to finish the season on a win,” Kelly said.

More than just a victory is on the line Saturday.

“I still think it's the rivalry game,” Kelly said.

It's also a duel that dates back to the legendary days of Knute Rockne.

“How many times can you match up two teams, one from the West Coast and one from Indiana at the end of the year, I just think the significance of it, historically, tradition-wise, geographically, there's no game like it,” Kelly said.

And it's a game that is an opportunity to end the 2014 regular season on an 8-4 high note.

“Two years ago it meant an undefeated season, so these games seem to have a huge impact on what happens at the end of the season,” Kelly said.

Saturday's showdown will be the 86th time in series history that Notre Dame and USC will meet. The two teams have met almost every year since 1926 when Knute Rockne became the first Midwestern coach to take a team to the West Coast.