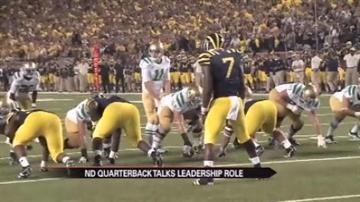 NOTRE DAME, Ind.-- It's Michigan week and it's the football game everyone's talking about. The Fighting Irish are heading to the Big House Saturday to take on the Michigan Wolverines in what's become a big regional rivalry in recent years.

This week all eyes are on Fighting Irish quarterback Tommy Rees and the rest of the football team. The team will face-off against Michigan Saturday night on a national stage. So, does that change how the team leader prepares?

"I'm not really changing much of what I do. I think, all of us know how to come and practice and what it takes week in and week out to win football games, and for me, it's just continuing to be a leader and to push the offense and to strive to have the best practices we can," Rees said.

Having another shot at being the starting quarterback, Rees believes this time around he is more of a leader than before.

Against Temple Rees threw for nearly 350 yards, and he did that by throwing just 16 completed passes. Rewind to two years ago against Michigan at the Big House, it took Rees nearly twice as many throws to even get above 300 yards passing. There he was 27 for 39 with just 315 yards.

Now what about turnovers? Two years ago, Rees threw two interceptions in the game and the Irish had five turnovers in total. Against Temple they had zero turnovers, so it really depends on which team decides to show up in Ann Arbor Saturday.