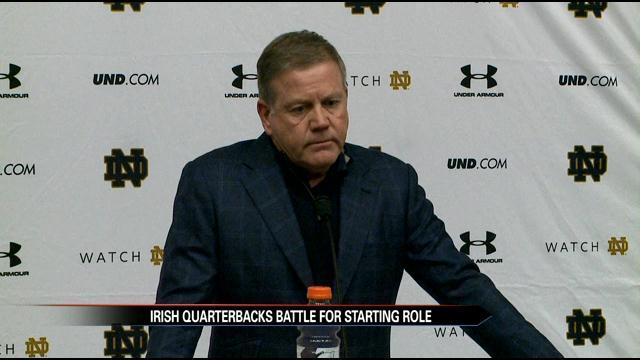 As the Irish prepare for LSU in the Music City Bowl on December 30th, Coach Brian Kelly has yet to name who will be the starting quarterback, with Everett Golson and Malik Zaire in a competitive battle for the spot.

After the Irish ended the season on a losing note, Coach Kelly opened up the quarterback competition, hoping to find the right man for the job when they take on the Tigers in Nashville.

During a press conference Saturday, Coach Kelly said this bowl game features one of the toughest opponents the Irish have faced all season.

“This is one that we wanted, and again, they are a formidable opponent, very good SEC team. You can see what their record indicates and what they can do. It's going to be a great challenge.”

Kelly went on to say it is likely that both quarterbacks will play in that game, depending on which one gives the Irish the best chance to win at that point in time.