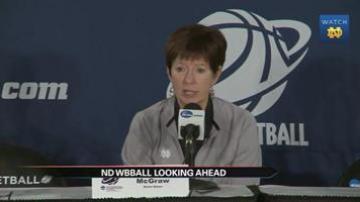 SOUTH BEND, Ind.-- The Notre Dame Women's Basketball team is heading to the Elite Eight after a big win on Saturday.

The Irish have played Baylor 4 times in the past 4 years but they have been unable to secure a victory.

Head Coach Muffet McGraw said she is ready to lead her team on a quest to a perfect season.

McGraw said, “We have played them a few times, I don’t think we have ever beat them so we are definitely going to be motivated.”

“The records she’s setting this year are amazing, I didn’t think anyone could do anything like that. I mean scoring a thousand points in a season, that’s a phenomenal accomplishment,” McGraw said.

For the seniors, beating the Bears would solidify their legacy.

Natalie Anchonwa said, “Especially with the last loss that we had, being home against Baylor it adds that much more motivation and we are that much more excited to play them on our home court.”

Kayla McBride hopes that a quick start on their home court will propel them to a championship.

“It’s something special, especially as a senior, you go in there and you know they are going to be cheering for you and things like that. It brings a lot of adrenaline and energy to the game.” McBride said.

The Irish will play Baylor Monday at 7:30 in Purcell Pavillion.