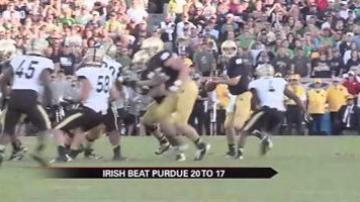 NOTRE DAME, Ind. - The Fighting Irish are now 2-0 on the season after beating their Indiana-rival Purdue at home Saturday.

It looked like a strong start for the Irish when rookie quarterback, Everett Golson launched a 22-yard pass to senior tight end and Irish captain, Tyler Eifert, in the first play of the game.

But, the opening drive was short lived and ended in a 50-yard punt.

The Irish started off slow, but then again, so did the Boilermakers. By the end of the first quarter neither team had put any points on the board.

But, there were a few big plays that put Golson's abilities on display.

Just before Notre Dame took their first timeout of the game, Golson got his speed and agility put to the test when he had to get himself out trouble with Purdue's Ryan Russell.

Then, the penalties started rolling in for the Irish. Senior outside tackle and captain Zack Martin got a 15-yard penalty for a late hit-- the first of two captains with 15-yard penalties.

The remainder of the first quarter was a possession tug-of-war with little notables except for Golson getting sacked twice and Irish captain, Kapron Lewis-Moore heading to the sidelines with a calf strain.

The second quarter started off with s strong showing by the Irish defense. Senior inside linebacker and Notre Dame captain, Manti Te'o executed a nice QB hurry that forced Purdue's quarterback Caleb TerBush to through an incomplete pass and eventually punt the ball.

For their first drive of the second quarter, Notre Dame didn't' accomplish much with a quick 3-and-out for a gain of only 7 yards and 2 minutes of possession. After a 40-yard punt, Purdue had the ball back on their own 37-yard line.

But, Notre Dame's junior nose guard, Louis Nix III dished out some Irish chocolate and railed Purdue quarterback Robert Marve, for a 3-yard loss and the the first sack of the game for the Irish defense.

Purdue recovered from the sack with a 7 play drive before punting to the Notre Dame 12 yard line.

Notre Dame started their drive with 9:03 on clock.

Golson threw two bombs in this series. The first was to Troy Niklas for 30-yards and then another to DaVaris Daniels for 41-yards. The drive ended with Golson rushing for 3-yards and diving into the end zone for the first points of the game. The total drive was 88-yards and Golson had 83 of those yards.

Purdue got the ball back with just 3:45 remaining in the half but managed a 13 play drive for 58 yards that ended in a touchdown of their own-- successfully tying the game going into the half.

Purdue started the half with a quick 3-and out and only 50 seconds of possession time.

Notre Dame's first drive of the second half started with an incomplete pass to the new Irish go-to, Tyler Eifert. Sophomore running back, But, after Theo Riddick rushed for a total of 16 yards and Golson threw for a total of 50 yards plus a Purdue penalty and a Golson fumble, the Irish scored another touchdown and Brindza put the ball through the uprights. Notre Dame took the lead 14 to 7.

Then, just 10 seconds after Purdue gets the ball back, Purdue's TerBush threw an interception in the short field. Notre Dame's junior corner back Bennett Jackson got his first career interception and returned it for 11 yards to the Purdue 20 yard line.

Unfortunately, the excitement of the interception didn't' result in much. But the Irish were able to put 3 more points on the board when Brindza hit a 30 yard field goal. Irish up 17 to 7

The fourth quarter is when both teams put the pedal to the metal. Purdue hit a 33 yard field goal just 2 seconds into the final quarter, putting them one drive away from tying the game and after 12 minutes of back and forth and several 3-and-outs, Purdue tied up the game with just 3:24 remaining.

But, Notre Dame's final drive of the game was by far, the high light of the game. Let's break it down.

Sophomore running back George Atkinson III returned the kick for 32 yards and then, Head Coach Brian Kelly surprised everyone... by putting in recently unsuspended quarterback Tommy Rees for Golson.

Purdue gets a 10-yard penalty for holding and the Irish were at their own 45-yard line.

Rees' first pass was incomplete to TJ Jones, but his second pass to Robby Toma is complete for a 4-yard gain.

Rees then hit senior John Goodman for a 10-yard gain at the Purdue 41 yard line and the Irish got their first down.

Rees' next pass to Niklas was incomplete and his next was incomplete to Jones. But, the third-time was the charm, apparently. Rees found Robby Toma for a 21 yard gain on the Purdue 20 yard line and a first down.

Then, the Irish rushing game took over. Riddick rushed for 12 yards on the next two plays-- putting Notre Dame in perfect field goal position.

Brindza hit a 27 yard field goal with 7 seconds remaining in the game and the Irish sealed their victory, 20-17.