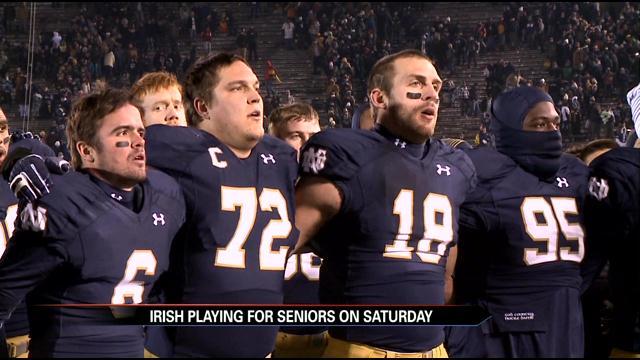 This week the Fighting Irish are looking to get rid of the bitter taste of losing to Northwestern and they hope to make a comeback with a win in their final home game of the season against the Louisville Cardinals.

“Didn't take care of business last week with that and so we have a pretty bitter taste in our mouths,” Irish team captain and running back Cam McDaniel said Wednesday.

This week, the Irish want to be sure they take care of business.

And Notre Dame looks to do that with a victory over the 24th-ranked Louisville Cardinals.

“They can run the ball, they've got some great receivers and some guys that can just go up and catch anything, we've got to play good defense and especially schematically we've got to be on point,” Irish team captain and safety Austin Collinsworth said.

The Cardinals boast a defense that is ranked fifth in the nation.

“They do a good job of making other teams turn the football over, so we've got to take care of the football once again. An overall solid defense,” McDaniel said.

And not only does the Blue and Gold want a win Saturday for their fans.

“Losing at home, that's something you never want to happen,” McDaniel said.

They also want to come out on top for their seniors.

“We're still going about our normal routine still preparing for a win, but I think a little extra bit knowing it's the seniors last home game, we've been trying to get that stuck in people's minds too,” Irish tight end Ben Koyack said.

And the Irish say a win this Saturday, would keep their recent Senior Day win streak alive.

“It means a lot to our program, we haven't lost a senior game in four years,” Rochell said.

Brian Kelly is 4-0 on Senior Day, and with a win this Saturday, Kelly would become the first coach at Notre Dame to win his first five senior days since Terry Brennan, who coached back in the 1950's.