Is Black Friday spreading to Thanksgiving? 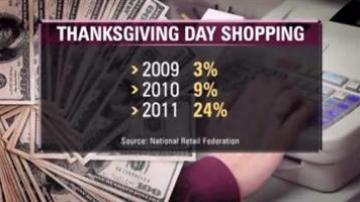 It used to be known as Black Friday but now it's looking more and more like it will be Black Thursday.

Large retail chains including Toys 'R' Us, Target, Kmart, Walmart, and Sears are opening their doors to deals on Thanksgiving night.

According to the National Retail Federation, in 2009, 3 percent of Thanksgiving weekend shoppers hit the stores on Thursday. The number increased In 2010 to 9 percent and in 2011 to 24 percent.

But some stores are resisting this change. Keeping the holiday shopping tradition to after turkey eating hours. In fact JC Penny tweeted out: Thanksgiving is for thanking. Not shopping.