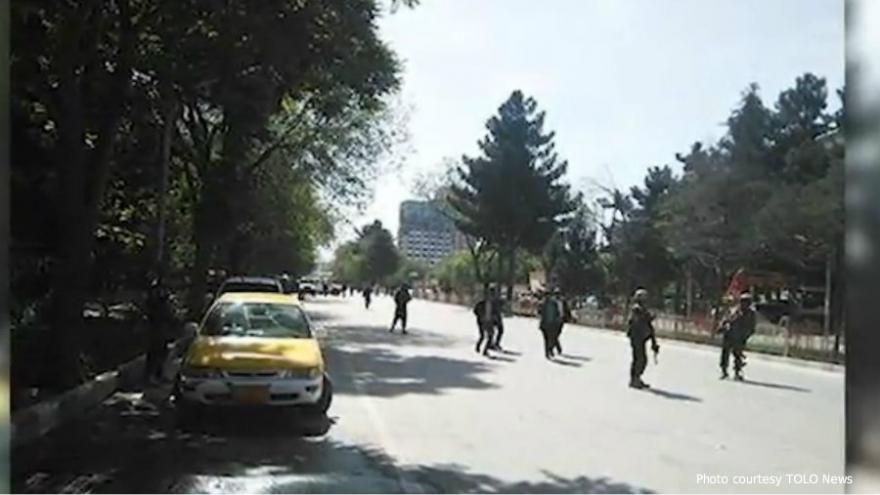 The Islamic State group has taken responsibility for the double suicide bombing in Kabul this morning that killed 25 people, including eight journalists.

The Afghan affiliate of the militant group, known as Khorasan Province, posted an urgent statement on an IS-affiliate website saying two of its martyrdom seekers carried out the double bombing on Monday targeting the headquarters of the "renegade" Afghan intelligence services in Kabul.

The statement did not say that journalists were specifically targeted but exaggerated the attacks' death toll.

An Afghan media watchdog says eight Afghan journalists have been killed in this morning's suicide attacks in Kabul that claimed at least 25 lives.

A statement from the Afghan Journalists Safety Committee also says that so far, six journalists have been reported wounded in Monday's attacks. The group strongly condemned all attacks against journalists.

The double suicide bombing took place in the central Kabul district of Shash Darak area, which is home to the NATO headquarters and a number of embassies in Afghanistan.

Police say the first bomber was on a motorcycle while the second was on foot, mixing in with a group of reporters who had rushed to the scene of the first bombing.

The fatalities among the reporters included Agence France-Presse's chief photographer in Kabul, Shah Marai, and also a cameraman for the local Tolo TV station.

An Afghan spokesman has confirmed that five journalists working for local media have been killed, along with an AFP photographer, in this morning's suicide attacks in Kabul.

The statement brings to six the number of fatalities among journalists in the Kabul bombings on Monday, which left 25 dead.

Wahid Majorh, spokesman for the public health ministry, says there are also wounded journalists among the casualties that have been taken to different hospitals in the Afghan capital. He did not have a totalfigure. At least 45 people were reported wounded in the attacks.

Afghan President Asharf Ghani has strongly condemned the attacks in Kabul. A statement released form the presidential palace says that attacks targeting innocent civilians, worshippers inside the mosques, national and democratic processes, reporters and freedom of speech all are war crimes.

A Kabul police spokesman has raised the casualty toll from the double suicide attacks in the Afghan capital to 25 killed and at least 45 wounded.

The spokesman, Hashmat Stanekzai, says that along with the two journalists killed in the bombings — an AFP photographer and a cameraman for the local Tolo TV station — four policemen were also among those killed.

Stanekzai says the first suicide bomber was on a motor bike while the second attacker was among the crowd of reporters that rushed to the scene of the first attack, pretending to be one of the media.

He added that the second attacker then detonated his explosives while still among the reporters.

An Afghan official says the death toll from the Kabul attacks has now reached 21, with 27 people reported wounded.

No one has claimed responsibility for the attack, but both Taliban and Islamic State group are active and have repeatedly claimed attacks in Kabul.

Agence France-Presse has reported that the news agency's chief photographer in Kabul, Shah Marai, has been killed in the twin suicide attacks in the Afghan capital.

AFP says Marai died in a blast that was targeting a group of journalists who had rushed to the scene of a suicide attack in Kabul.

Sediqullah Tawhidi, an official form the journalist safety committee says that another journalist was among those who were killed on Monday's attack. Tawhidi says that a cameraman form the local TOLO TV also was killed.

An Afghan official says that at least seven people were killed in two suicide bomb attacks in the capital, Kabul.

Wahid Majroh, spokesman for the public health ministry, says 20 other people were wounded in the attack.

Hashmat Stanekzai, spokesman for the Kabul Police chief, says that first bomber was on a motorbike and the second suicide bomber was on foot.

The second attacker was among reporters who had gathered at the scene to cover the attack, added Stanekzai.

An Afghan official says initial reports show at least six people were killed and 14 were wounded in double explosions in central Kabul.

Mohammad Asim, chief of the Kabul ambulance service, said five people were killed and 11 were wounded in the initial blast Monday morning.

The first explosion was soon followed by another. Police officer Jan Agha at the scene of the blast said a journalist died in the second blast, which also wounded two police officers.

The police chief said the central area of Kabul that was targeted includes foreign offices.

No one immediately claimed responsibility for the attacks in Kabul.

Mohammad Asim, chief of the Kabul ambulance service, said three people were killed and six were wounded in the initial blast Monday morning.

The first explosion was soon followed by another. Police officer Jan Agha said a journalist died in the second blast, which also wounded two police officers.

The police chief said the central area of Kabul that was targeted includes foreign offices.

More details were not immediately available.

Authorities in Kabul say an explosion has occurred in the center of the Afghan capital and several people were hurt.

Mohammad Mousa Zahir, director of Wazir Akbarkhan Hospital, said several people suffering injuries from the blast were being treated at the hospital.

More information was not immediately available.