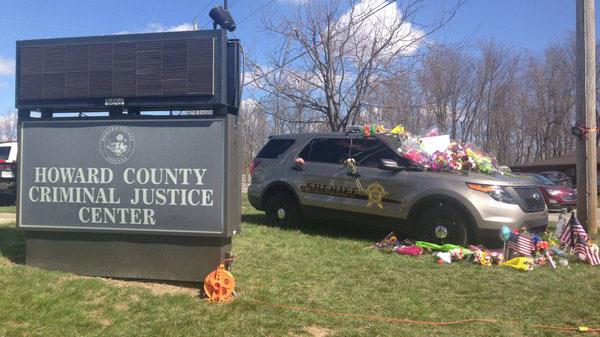 The man who is suspected of killing Howard County Deputy Carl Koontz has been identified and the sheriff has updated the condition of the other officer injured.

The suspect has been identified as 25 year old Evan Dorsey.

At approximately 12:30 a.m. Sunday, Koontz and Sergeant Jordan Buckley and officers from the Kokomo Police Department went to a home on Chandler Street in Russiaville to serve a search warrant.

When the officers knocked on the door, there was no answer. Upon entering the home, someone fired at the officers and they returned fire, according to Indiana State Police.

Koontz and Buckley were wounded and airlifted to Methodist Hospital in Indianapolis.

After a two hour standoff, SWAT personnel located Dorsey deceased inside the residence.

Late Sunday morning at the hospital, Koontz died from his injuries.

Sergeant Buckley was released from the hospital Monday. He is expected to make a full recovery.

At the sheriff's department, people have been leaving flowers and messages for Koontz, his family and the department.

"Deputy Koontz leaves behind a wife and an 8-month-old son Noah. Which just adds to the tragedy of course," Perrine said.

State and local law enforcement went to Indianapolis for a procession to bring Koontz's body back to Howard County. There were 143 officers in the procession.

"When an officer is killed, it ripples across the nation. And there is an incredible outpouring of support and people that support law enforcement," Perrine said.

Monday, the Indiana State Police released the results of the autopsies on both Koontz and Dorsey.

The cause of death for Deputy Koontz was a single gunshot wound to the pelvis.

Dorsey's cause of death was a self inflicted gunshot wound to the head.

Indiana Gov. Mike Pence ordered flags to be flown at half-staff until sunset on the day of Koontz's funeral.

Karen and I were deeply saddened to learn of the passing of Howard County Sheriff's Deputy Carl Koontz and we extend our deepest condolences and prayers to his family, friends and the law enforcement community of Howard County who grieve the passing of this courageous young officer. Indiana will always honor the memory of Deputy Koontz and will always be grateful for his courageous service. Deputy Koontz lost his life in the line of duty and his passing reminds us all of the courage and risk that every member of our law enforcement community and their families face every day in the defending our communities.

We also offer our gratitude and prayers to Sergeant Jordan Buckley who was injured during the same incident in the line of duty. We are grateful for his courage and pray that he will make a quick recovery from his injuries and be restored soon to his family and his service to the people of Howard County.