ISP: Man who stole semi for a joyride may have mental health issues 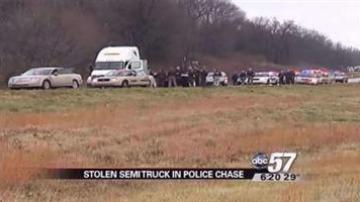 WARRICK COUNTY, Ind. -- He took a semi for a joyride, but now he's in police custody!

Police said Brent Arthur saw the keys inside the ignition of a semi at a Crawford County truck stop and helped himself!

Indiana state troopers chased Arthur nearly 35 miles down I-64, but the joyride came to an end when he hit the stop-sticks and blew the tires.

Police are still wondering why he stole the truck.

"You have no idea, there may have been some mental issues, we're just not 100% sure at this point," said Sgt. Todd Ringle of the Indiana State Police.

No one was injured, but Arthur was taken to Jasper Memorial Hospital for a mental evaluation.

He will then be taken to the Dubois County Jail.

He has been charged with resisting law enforcement, theft, and possession of stolen property.