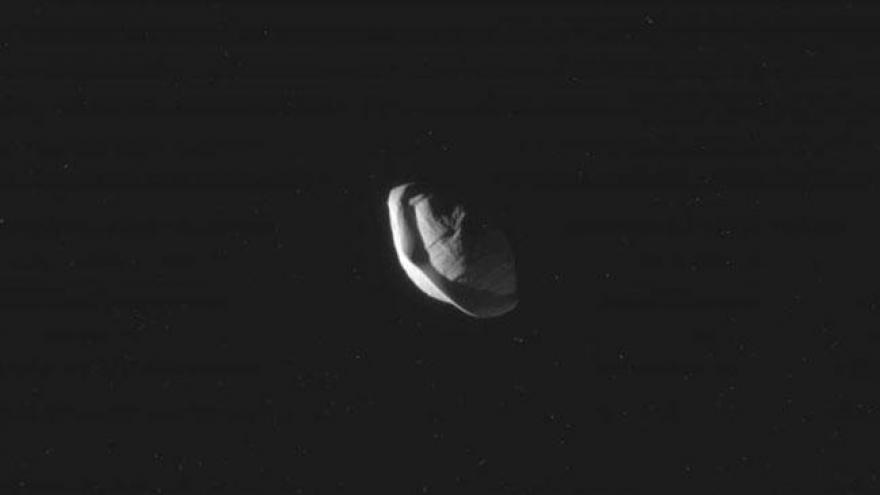 (CNN) -- NASA on Thursday released pictures of Pan, one of Saturn's many moons, and its distinctive shape is drawing comparisons to flying saucers and stuffed pasta.

The images of the moon come courtesy of NASA's Cassini spacecraft, and reveal the UFO-like form of the tiny satellite, which has an average radius of just 8.8 miles.

Twitter users quickly chimed in. "Should or could be called Wonton or Ravioli but that's amazing!!!" one wrote. "Sign me up! Ravioli is one of my favorite foods," said another.

One artist even took the time to make a little comic.

According to NASA's website, Pan's strange shape comes from what is called an equatorial ridge, a characteristic it shares with one of its sister moons, Atlas.

The ridge has formed over the course of Pan's history because it orbits Saturn inside the planet's rings, collecting stray particles as it goes, said Preston Dyches, a spokesman for NASA's Jet Propulsion Laboratory in Pasadena, California.

Pan is Saturn's closest moon, and orbits the planet in just 13.8 hours.

Earlier this year, Cassini sent back images of Tethys, another Saturn moon that has a striking resemblance to the Death Star from "Star Wars."

Cassini is a joint effort between NASA, the European Space Agency and the Italian space agency, Agenzia Spaziale Italiana. It was originally launched in June 2008 on a mission to explore the Saturn System.

In September, Cassini's mission will come to an end when it hurtles towards Saturn's surface for what NASA is calling the "Grand Finale." On its way down, the spacecraft will collect information and data such as the strength of Saturn's gravity as well as more pictures of the planet's rings.

But for now, it will continue to beam back stunning images of Saturn and space ravioli.