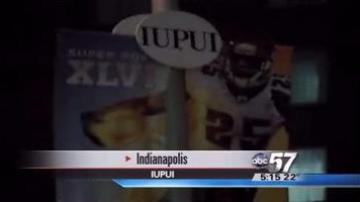 INDIANAPOLIS, Ind. -- Football fans are counting the days until Super Bowl XLVI, but for some IUPUI students, they say they are dreading the big event.

The university is in the heart of downtown Indy and the Super Bowl route runs right through campus. The New England Patriots are also staying at the university's hotel.

Now students are speaking out.

"I think the Super Bowl's a great for the city,” said IUPUI student Christ Gault. “I just think that it shouldn't hinder our educations."

"We don’t want to have students be stuck in traffic and not be able to get to a class and then be penalized,” said IUPUI spokesman Rich Schneider.

The school says 12,000 parking spaces will still be available for students, and most restrictions are on days when students don't have class.