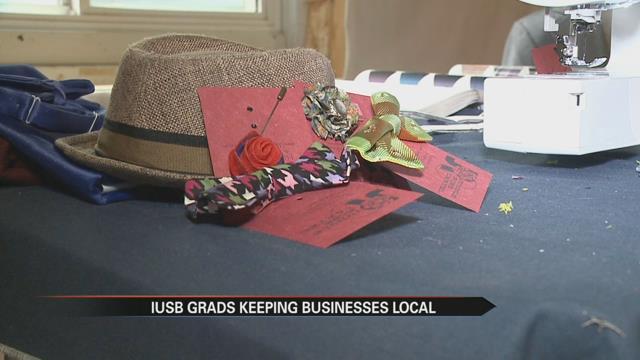 Two different entrepreneurs have opened up businesses in the textile industry and say while staying local was a decision that isn’t typical to their industry, it’s working for them.

Scraps of customized fabric aren’t on the floor of a big city studio. They’re in South Bend.

This finance major and IUSB alum now finds himself comfortably behind a sewing machine.

“The first tie I made I stitched together with hand and needle two different pieces of fabric just took a neck tie like this cut it half and stitched it together,” says Richardson.

For about a year Richardson along with two other IUSB alum have been making bow ties and lapel pins out of Richardson’s basement on Notre Dame Avenue.

“I think about the opportunities that have been given to me because I stayed local I’m glad that I did at this time in my life,” says Richardson.

“We had six weddings this summer, one in California, one in South Carolina we are working on right now, a few here in South Bend. It’s great to be able to say hey we ship nationwide,” says Richardson.

People like Jill Scicchitano with Downtown South Bend who have been helping entrepreneurs for years.

“We just have a lot of things that we would like to offer to make it affordable and easy for them to make the transition into doing business,” says Scicchitano.

“I just had my grand opening this week. I’m happy and excited and scared,” says Stephens.

Stephens tailors clothing on Lafayette Boulevard and says the location eases her nerves.

“Just the network of people here just makes it really easy to say I want to be an entrepreneur and open your own business. It’s easier to do it than to move some place in a larger city,” says Stephens.