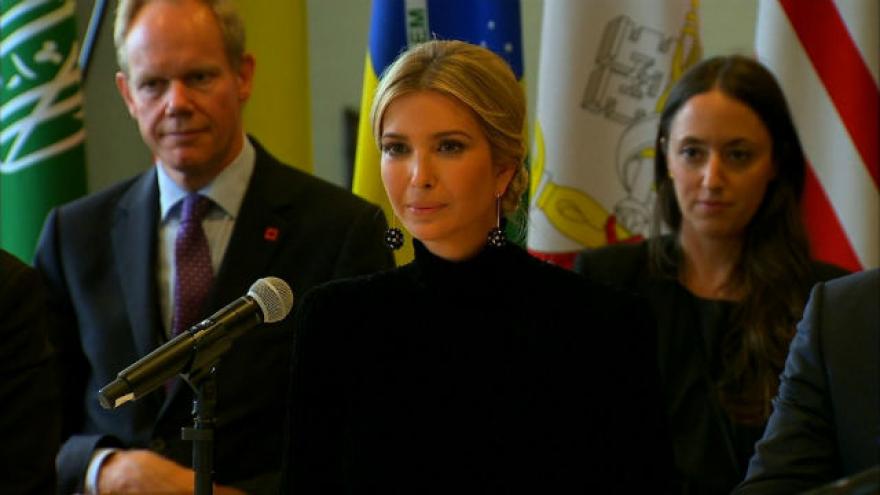 "This is a call for action, a call for global unity," Trump said at a panel event hosted by Great Britain and Northern Ireland, noting that her father, President Donald Trump, has said he is "prepared to bring the full force and weight of our government" to combat human trafficking.

Human trafficking is chronically under-reported problem that affects at least 20.9 million people globally in both forced labor and sex trafficking.

"It is hard to grasp how tens of millions of people across the globe can experience this scale of human suffering. It is unacceptable," Trump said. "Human trafficking, forced labor and modern slavery splinters families, distorts global markets, undermines the rule of law, strengthens transnational organized criminal networks and threatens national security everywhere."

Trump, a senior adviser to the President, attended the event as a guest of British Prime Minister Theresa May, who invited her to participate after meeting at the G20 Summit earlier this summer. May thanked Trump for the "personal shared commitment" to the issue.

Ivanka Trump has made combating human trafficking in the US and globally a key aspect of her West Wing portfolio. Trump organized a listening session with survivors and advocates at the White House alongside her father in late February and held a roundtable discussion on the topic in May.

Later that month during the President's trip to Rome, she made a separate stop to meet with officials and survivors at the Community of Sant'Egidio, a Vatican-affiliated NGO.

She spoke at a State Department event unveiling the annual Trafficking in Persons report in June, calling human trafficking an "ugly stain on civilization."

Trump cited specific progress by the administration in her June speech, including "an executive order designed to strengthen the enforcement of federal law in regards to transnational criminal organizations, including traffickers," and steps taken to ensure Department of Homeland Security personnel are trained to combat trafficking at points of entry into the United States.

"This is just our most recent step in our many efforts to combat this global problem," she said.

With Tuesday's speech, Trump is styling herself as a diplomat in her own right. In addition to her remarks, she is attending multiple private meetings with world leaders during the annual confab at the United Nations, where she is expected to discuss women's economic empowerment, skills training and workforce development.

The foreign ministers of Australia and India both requested meetings with the first daughter, as well as the president of the International Committee for the Red Cross. Trump will travel to India later this year, leading the US delegation to the US Global Entrepreneurship Summit in November.

Trump is also expected to have coffee with Queen Maxima of the Netherlands, with whom she participated on a panel at the Women 20 Summit in Berlin earlier this year where German Chancellor Angela Merkel announced the creation of a World Bank facility aimed at women's economic empowerment.

She also showed an interest in engaging with world leaders -- and also faced criticism -- for briefly taking her father's seat during the G20 summit in Hamburg.

"Our country values our partnership in combating this pervasive humanitarian issue," she said. "Thank you for being champions in this fight against evil."