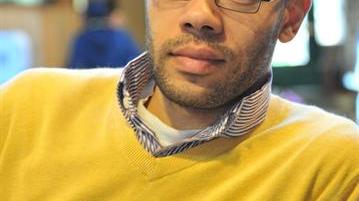 It’s been 10 years since Anthony Thurman graduated from Ivy Tech Community College Northwest.  But since that time, the computer information systems major has taken his love for animation and produced four short films that have won him national and international acclaim.

Thurman, who is employed at Ivy Tech Northwest’s Gary campus as a part-timer in the computer lab, has been asked to participate in three film festivals in October.  His short film The Depression of Detective Downs 2: On Depression's Edge has already won the Highly Commended award in the animated category at the Scottish Mental Health Arts & Film Festival in Glasgow, Scotland and will be screened Oct. 24.  The film will also run at the HorrorQuest Film Fest October 22 in Atlanta and the InterACT Disability Arts Festival, Saturday Oct. 29 in Auckland, New Zealand.

“I've done four animated short films in all including the new Detective Downs 2,” said Thurman.  Along with accolades for his first two Detective Downs films, he has won awards from the First Annual Macon Film and Video Festival in Macon, Georgia for Not Until You Dance and one for Tomb Hackers.

Thurman debuted Detective Downs 2 at the Gary campus in early 2011.  At that time he detailed how much time it takes to put his films together.  The animation is just one part of the process, which may take up to three to four years to complete a 15 to 20-minute film.  But he also has to find voice-over actors, composers and other technical people to finish the production.

Thurman says he spends time on the internet searching for film production sites and talent that can help him.  The composer for his last film had done work for Grey’s Anatomy.  “I contacted her and asked if she would be interested.  After I got the film finished and she saw it, she thought the animated images were so good she did it below her normal rate.”

(Source: This was a press release provided by Ivy Tech.)