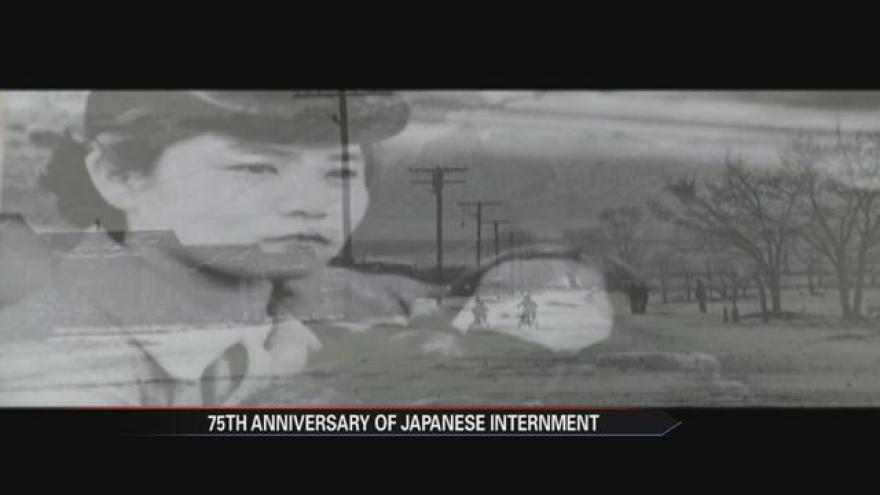 "I remember myself as a 5-year-old boy gazing out of the front window of our living room," Takei said at a preview of an exhibit at the Japanese American National Museum in Los Angeles.

"I saw two soldiers marching up our driveway. They carried rifles with shiny bayonets on them."

Takei remembers being put on a rail car with other Japanese-Americans. He was incarcerated with his family at the camps near Rohwer, Arkansas, and Tule Lake, California.

"I remember the barbed wire fences that confined us," Takei said. "I remember the tall sentry towers, with the guns pointed down at us. I remember the searchlights that followed me when I made the night runs from our barrack to the latrine."

Sunday marks the 75th anniversary of a dark chapter in American history -- a moment when the country denied residents civil liberties, based solely on race and nationality.

"That executive order profoundly changed the lives of 120,000 people," Takei said. "I was one of them."

The order paved the way for the forced removal and incarceration of people of Japanese descent, two-thirds of them US citizens. They were sent to remote prison camps and lost their homes, jobs and possessions. Anyone who had 1/16th Japanese ancestry was ordered into a camp.

The museum's exhibit revisits that time in history. "Instructions to All Persons: Reflections on Executive Order 9066" opens Saturday and runs through May 21.

The exhibit includes the original hand-typed order featuring Roosevelt's signature, on loan from the National Archives. It will be on display for the first time on the West Coast.

"This year's Day of Remembrance commemorates the 75th anniversary of this historic miscarriage of justice, recognizing its continued relevance in today's political climate and supporting civil and human rights for all," the museum says on its website.

The government called the mass arrests and imprisonment "internment" -- but the word does not capture the extent of the horror inflicted on them.

Joyce Nakamura-Okazaki, 82, bristles at the word "internment." She was 7 when she was rounded up with her family.

"We were citizens and put into a concentration camp," Nakamura-Okazaki said. "'Incarceration' or 'imprisonment' is better (to describe it). 'Internment' is a euphemistic word promoted by the government to make it seem less harsh."

Pat Sakamoto, 72, was born at the Manzanar War Relocation Center, where her mother and toddler sister were imprisoned during the war. Sakamoto's father, born in the United States, refused to sign a loyalty pledge to his country that was forcing him into a camp, so he was deported to Japan, a country he had never visited.

"My mother never had contact with him again, so I never met my biological father," says Sakamoto.

She said she stayed at the camp until November 1945.

President Ronald Reagan signed legislation in 1988 that paid reparations to the Japanese-Americans who were imprisoned. The legislation apologized for the government action, saying it was based on "race prejudice, war hysteria, and a failure of political leadership."

Sakamoto and others say they are troubled by President Donald Trump's executive order on immigration, signed last month, that temporarily barred citizens from seven Muslim-majority countries from entering the United States. The president is vowing to roll out a new executive order next week that will be tailored to a federal court decision that blocked his travel ban.

"In some way, history is repeating itself," Sakamoto said. "I'm fearful for a lot of the Latinos and Muslims, because they are being sent back. It is because of what we look like -- you could tell us from the white population."

"It is absolutely wrong and against the Constitution to target one group of people and pass certain laws against that group," Nakamura-Okazaki said.

Takei said Trump's executive order "had the same animus and prejudice and ignorance" as the one signed by Roosevelt in 1942.

"But it is a different America today," Takei added after noting the mass protests sparked by Trump's order.

"I never thought I'd fight for any political thing but I feel I need to say something now," said Sakamoto. "My mother did what she was told to do. It makes me sad she couldn't express how she felt. I need to be my mother's voice."