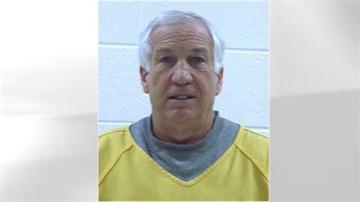 Former Penn State assistant football coach Jerry Sandusky was arrested and jailed Wednesday in the wake of new sexual assault charges filed against him by a grand jury.

Sandusky was handcuffed and taken out of his home by state police and brought to an arraignment before a judge in Centre County, Pa., for the new charges, which include assaulting two boys involved in his Second Mile charity.

Sandusky was taken to Centre County Correctional Facility for processing and will remain there until bail is posted. His attorney, Joe Amendola, said he is getting paperwork together to try and post bail by Thursday morning. Bail was set at $250,000, cash, although the prosecutor had asked for $1 million. If bail is posted, Sandusky is not permitted to step onto Penn State property and will be monitored electronically.

Amendola told ABC News that he had no knowledge of the charges ahead of the arrest.

"I'm very disappointed that I didn't even get a courtesy call that new charges had been filed. I had to find out from the media," Amendola said.

Sandusky, wearing Penn State pants at the time of his arrest, requested that the arraignment not begin until Amendola arrived at the courthouse, according to ABC affiliate WPVI.

Amendola greeted Sandusky in the courtroom by saying, "Told you. We had this discussion. Some day you will listen to me," to which Sandusky smiled, according to WPVI.

In court, Amendola asked for lower bail, arguing that his client was not a flight risk, and that he'd been subjected to heavy media coverage and confined to his home.

The new alleged victims came forward in the wake of the earlier allegations against Sandusky, including 40 counts of child molestation, for which he was charged on Nov. 5.

According to the state attorney general, both men met Sandusky through the Second Mile charity, were plied with trips to football games, and were abused by him in Sandusky's home.

The man, now 19 and identified as Victim 9, met Sandusky at a Second Mile swimming event when the boy was 11 or 12, according to new information in the grand jury presentment. Sandusky asked for his phone number, which he then used to ask the boy's mother if he could spend more time with the boy, and then proceeded to pick the boy up from school and take him to Sandusky's home for sleepovers.

At the Sandusky home, the boy said he was forced to stay in the basement at all times, and was even brought his meals there by Sandusky and told not to leave. He testified that he had little contact with Dottie Sandusky, Jerry's wife, and that she never came to the basement. Sandusky allegedly sexually assaulted the boy in the basement bedroom numerous times, including forcible rape. On one occasion, the boy screamed for help, hoping Dottie Sandusky would hear him from upstairs, but she did not come downstairs, he said.

The man testified that Sandusky would also take him to a hotel in State College and assault the boy in the pool and jacuzzi there.

The other victim identified in the new allegations, now in his mid-20s, says Sandusky met him through the Second Mile when he was 10 and invited him to his home for a Penn State football game. Sandusky then started a pattern of abuse that included wrestling with the boy and then pulling his pants off and performing oral sex on him, according to the testimony.

The man said that Sandusky also groped him in the campus swimming pool before playfully throwing him above water.

Sandusky also allegedly requested oral sex from the boy on multiple occasions, including one time in a vehicle while the two were driving somewhere. The boy refused, and terminated his relationship with Sandusky.

The new charges include involuntary deviate sexual intercourse, unlawful contact with a minor, indecent assault, endangering the welfare of children, and corruption of minors.

The new charges will be included in an already-scheduled preliminary hearing on Tuesday.