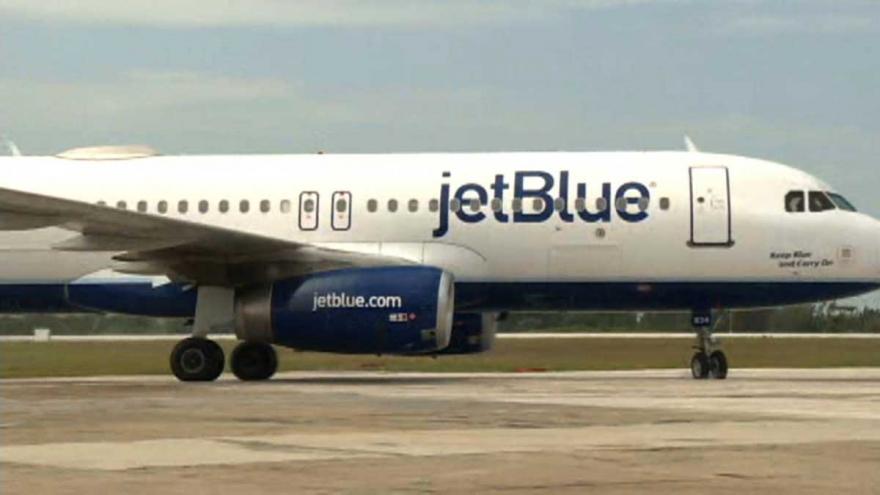 (CNN) -- A lithium battery in a passenger's laptop caught fire aboard a cross-country JetBlue flight Tuesday, causing the plane to divert to Grand Rapids, Michigan, the Federal Aviation Administration said.

The fire was caused by a lithium battery in a passenger's laptop, officials said. No one was injured on the flight, which was traveling from New York's JFK Airport to San Francisco, and the plane was not damaged. JetBlue said the plane was carrying 158 people and 37,300 pounds of fuel when it landed.

The fire came from a passenger's carry-on laptop, and was cooled by the time the plane landed, according to Air Traffic Control audio. There is no sign that the fire was intentionally started.

A passenger on the plane, 18-year-old Kailey Honniball, said that about two and a half hours into the flight she heard a message over the PA system: "Sounds like fire in 25!"

She looked back and saw smoke.

"I was really scared," Honniball said. "When you see a fire on the plane and you're in the air, there's nothing you can do."

As passengers stood and looked back at the commotion, flight attendants threw the smoldering backpack into a container and rushed it toward the rear gallery, Honniball said.

"(The crew) handled it pretty professionally," she said. "They kept calm."

Upon landing in Michigan, the fire department met the plane and took the charred backpack off the plane. About three hours later, the aircraft was back in the air and on its way to San Francisco.

Last year, Samsung's Galaxy Note 7 phones were banned from all flights after the company discovered that its lithium-ion batteries were faulty and could overheat and catch fire.

Spurred by fears of terrorism, the US government in March banned laptops in the passenger cabin on international flights from airports across the Middle East and North Africa. Homeland Security Secretary John Kelly has said the ban might expand to all international flights entering or leaving the US.