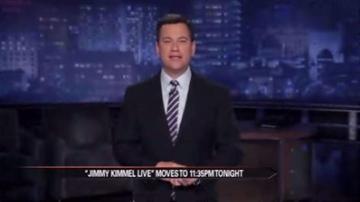 The big move is finally here. Jimmy Kimmel will take to the ABC 57's airwaves a half hour earlier.

Even though it's a half hour earlier, Kimmel says it will be the same show with a slightly different look.

"It seems almost exactly the same to me," said Kimmel. "I'll be honest with you, there's no stage, really.  It's all flat now, which is a little odd. I don't like changes, you know, so it's going to take some getting
used to to me."

Nightline will just be on an hour later starting at 12:35 a.m.