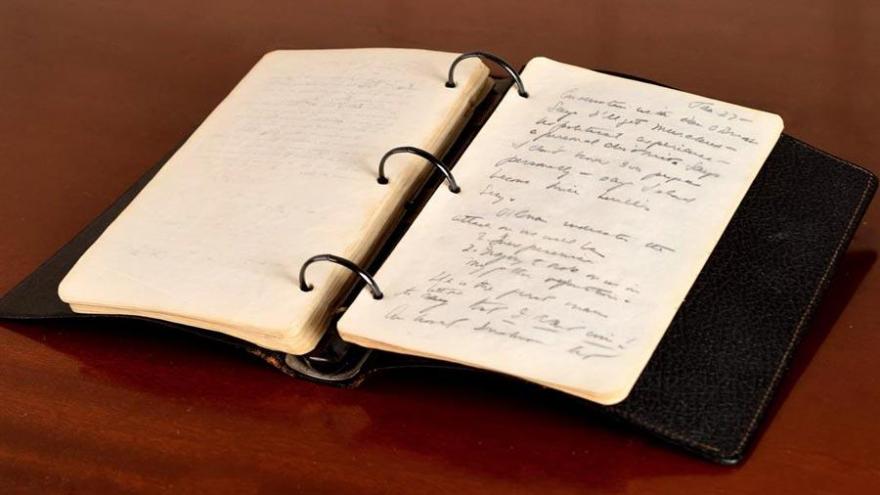 (CNN) -- A diary with John F. Kennedy's unedited inner thoughts on politics and his personal beliefs was sold at a Boston auction Wednesday for $718,750.

That's significantly higher than the original bid estimate of $200,000.

The 61-page diary includes both handwritten and typed pages, which are bound in a black leather binder. Kennedy kept the diary during his brief time as a journalist in the summer of 1945. He was working as a reporter for the Hearst newspaper company, a job his father, Ambassador Joseph Kennedy, arranged and after covering the opening session of the United Nations in San Francisco that May, he went abroad to cover post-war Europe.

By summer's end, Kennedy, who was 28 at the time, officially declared his run for Congress. And indeed the final handwritten pages of the diary include his reservations on running for office and his thoughts on why he wanted to serve.

"This exceptional diary sheds light on a side of John F. Kennedy seldom explored and confirms America's enduring sense that he was one of the most qualified, intelligent, and insightful commanders-in-chief in American history," said Bobby Livingston, spokesperson at RR Auction, which handled the sale.

The diary includes JFK's "own chilling premonitions of power-hungry Russia and the conflict that would be synonymous with his presidency: the Cold War," stated a press release from RR Auction.

He also warns about the perils of liberalism, writing: "The great danger in movements to the Left is that the protagonists of the movement are so wrapped up with the end that the means becomes secondary."

The diary was put up for auction by Deirdre Henderson, who worked for Kennedy as a research assistant.

"It was my hope that through the auction catalog, the diary would come to the attention of a wider audience and find a home worthy of its merit," Henderson said in a press release.

A Kennedy collector from Massachusetts, Joseph Alsop, had the winning bid at the live auction. Last year, the same auction house sold a love letter JFK wrote to his mistress.