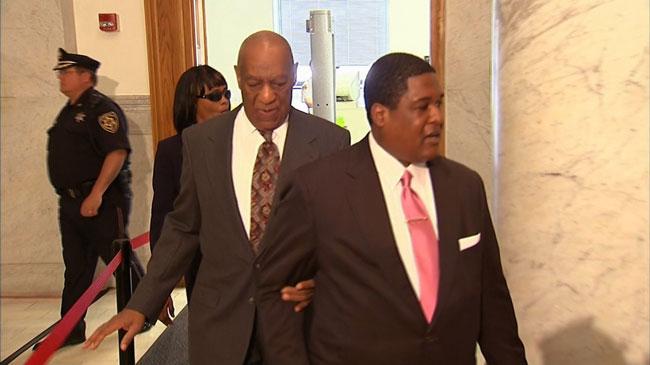 NORRISTOWN, Pennsylvania (CNN) -- More than a decade after he was first accused of sexual misconduct, Bill Cosby will go to trial.

During a pretrial hearing Tuesday, a Pennsylvania judge found enough evidence to proceed with a trial. Cosby's next court date will be July 20; it's not clear when his trial will start.

Cosby faces three counts of felony indecent assault from a 2004 case involving Andrea Constand, an employee at his alma mater, Temple University. She was the first of more than 50 women who have accused the comedian of sexual misconduct.

If convicted, Cosby faces up to 10 years in prison.

As he walked into court Tuesday, the 78-year-old -- who suffers from vision problems -- held onto the arm of his spokesman, Andrew Wyatt. During the hearing, Cosby appeared to listen attentively and occasionally stretched his neck.

Constand was not in court for the hearing Tuesday -- a fact that Cosby's defense team tried to capitalize on.

Defense attorney Brian McMonagle said prosecutors are relying on a statement made by Constand to police 11 years ago. He argued that "allowing hearsay" in the context of this case would be "wrong."

The defense tried to poke holes in the reliability of Constand's 2005 statement to police. The prosecution's first witness, Katherine Hart of the Montgomery County Detective Bureau, read parts of the statement in court Tuesday.

In the statement, Constand said Cosby invited her to his home in 2004 and told her to wear comfortable clothes. Constand said she was given two pills to "take the edge off" and was later sexually assaulted.

But when questioned by the defense, Hart acknowledged that she was not present for Constand's entire statement to police in January 2005.

Another detective finished the questioning that day. And that same evening, Constand was allowed to review her statement, and parts of it were crossed out or redacted.

"You're basically told here to tell us what somebody told another detective 11 years ago about what happened 12 years ago?" McMonagle asked Hart.

Constand was the first person to publicly allege sexual assault by Cosby.

After going to police, authorities declined to charge Cosby.

Bruce Castor, the Montgomery County district attorney at the time of the alleged incident, did not file sexual assault charges against Cosby, citing "insufficient credible and admissible evidence."

The parties reached a civil settlement in 2006, but the case was reopened as new evidence came to light, including the number of other accusers coming forward and some of his remarks during a 2005 deposition that were recently unsealed.

The newly elected prosecutor in Montgomery County, Kevin Steele, turned the Cosby case into an election issue. He promptly reopened it after taking office.

Cosby was charged with three felonies and arraigned in December, then released on $1 million bond.

Cosby has denied the allegations. He sued Constand in February, claiming she violated terms of the 2006 settlement.

Cosby has been accused of sexual misconduct by more than 50 women. But he will never stand trial in the vast majority of cases because the statutes of limitations have passed.

On Friday, a federal judge unsealed Camille Cosby's February deposition in a Massachusetts lawsuit filed against her husband.

At one point, she told a lawyer she had "no opinion" on whether Cosby's admission to the alleged procurement of Quaaludes for women he wanted to have sex with violated their marriage vows.

Cosby has denied he sexually assaulted any women.