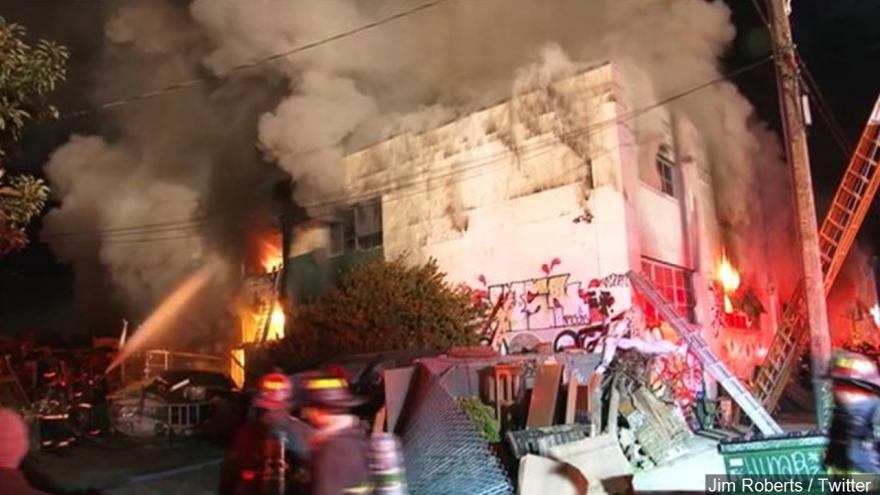 OAKLAND, Calif. (AP) — Two men who accepted a deal in exchange for each pleading no contest to 36 charges of involuntary manslaughter in connection with a California warehouse fire will likely be released from prison after serving just half their sentences.

It's typical for California prison inmates who keep a good disciplinary record to be released after serving half their terms.

Judge James Cramer on Friday is expected to sentence 48-year-old Derick Almena to nine years in prison and 28-year-old Max Harris to six years, even though relatives of victims of the 2016 blaze in Oakland have slammed the proposed sentences as too lenient.

Tearful, grieving relatives testified Thursday about their losses and asked Cramer to reject the deal, but he gave no indication that he would comply with the request.

A prosecutor said the two men had turned the warehouse into a residential "death trap" by cluttering it with highly flammable knick-knacks, blocking the building's few exits and failing to make adequate safety precautions before inviting the public inside.

Speakers at the hearing also criticized the city over the devastating fire.

"The city of Oakland should be held accountable" for failing to inspect and shut down the warehouse, Colleen Dolan said as she showed a photo of her smiling 33-year-old daughter, Chelsea Dolan, that had been taken a few weeks before her death.

Dolan also tried to display a coroner's photo of her daughter's charred body, but Cramer gently interrupted her and said he had previously seen it.

"I had to kiss that burned body goodbye," Dolan said, agreeing to comply. "I am angry and bereft."

Mataiasic asked the judge rhetorically if he had ever lost a child.

Many people in the courtroom gasped. The judge did not elaborate.

Cyrus Hoda, the brother of victim Sarah Hoda, 30, said the plea bargain was a "sweetheart deal" and labeled Almena and Harris as "culture vultures" trying to become San Francisco Bay Area arts players by luring people to a dangerous place to live and party.

Almena's wife and three children also lived in the warehouse but were staying in a nearby hotel the night of the fire. His wife, Micah Allison, and one of their daughters sat quietly in court alongside the grieving families.

Dressed in jail garb, Almena looked unemotionally at the relatives as they testified, while Harris stared at the judge, who approved the plea deal last month.

Cramer told relatives of victims to try to keep their emotions in check during the testimony, which he said would be "a heart-wrenching hearing as befits the enormous loss in this case."

Almena and Harris could have faced life in prison if convicted at a trial. They already have spent a year behind bars.

Investigators from the U.S. Bureau of Alcohol, Tobacco, Firearms and Explosives said they were unable to determine a cause of the blaze.

Victims' relatives allege in lawsuits that the Oakland Fire Department failed to inspect the warehouse annually as required and that inspectors would have discovered the illegal conversions.

Alex Katz, a spokesman for the city attorney, declined to comment.

PG&E said in a statement that it cooperated with the investigation and that a review of its records found no electrical problems at the building in the 10 years before the fire.

Warehouse owner Chor Ng, who has not been charged, did not return a phone message seeking comment.