July's weather trends & a look ahead to August 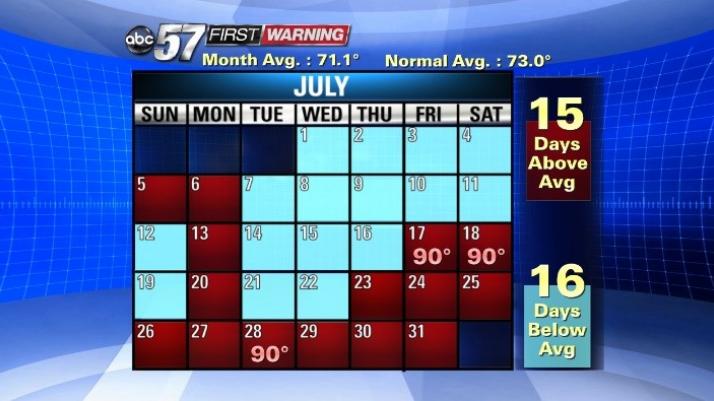 SOUTH BEND, Ind.-  From high temperatures in the upper 60’s on July 1st, to rainfall totals nearing two inches in just a 24-hour period, we can easily say that it was a cool and wet start to the month of July.  Now that we are wrapping up the last day of the month, it's time to look back at the weather trends of July and look ahead to what we can expect for the month of August for Michiana.

First, let’s talk about temperatures.  Typically, July’s average temperature is 73.0°.  This year, July 2015 fell short of that normal by just 1.9°.  Over the course of the month, South Bend recorded  3 days with 90° highs, which is just short of the average 4.2 days that July typically receives.  Plus, the first image to the right shows that out of the 31 days, 16 days recorded below average high temps while 15 days were above average.

So, July 2015 was just slightly cooler than the 30-year normal, but will August follow that same pattern?  According to the Climate Prediction Center, August will be another month where we are slightly below normal, temperature-wise.  To put this into perspective, the month of August typically sees two days of 90° heat, with the average high temperature reaching 81°.

As for rainfall for the month of July, even though the month was dominated by dry weather days (22 out of 31 days did not see any measurable rainfall), the 9 days that we did see rainfall brought enough rain to top the normal monthly rainfall by over an inch.  The greatest 24-hour rainfall recorded by the South Bend International Airport was on July 16-17th with 1.98”.  However, the farther southward in Michiana, some areas saw up to 2-3” of rain in a 24-hour period.

As for August, rainfall seems to remain right near normal.  Typically, South Bend averages at least 3.5 inches of rain for the month.  As always, the ABC57 First Warning Neighborhood Weather Team will give you your First Warning on the next chances for rain and thunderstorms as we wrap-up the last calendar month of meteorological summer.