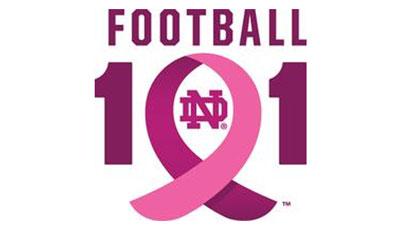 Join the Kelly Cares Foundation for the seventh annual Football 101.

The Pokagon Band of Potawatomi Indians and its Four Winds® Casinos return as the presenting sponsors for the popular regularly-sold out event. Women at least 21 years of age are invited to receive a tutorial session on football basics directly from the Irish coaching staff and players, a tour of the team’s facilities and an Under Armour NFL Combine-style shirt. The 2016 edition will also include A Taste of the Town featuring A Sweet Retreat.

Football 101 will run from 5-10 p.m. on June 14 supporting the Kelly Cares Foundation, a charity founded by Notre Dame head coach Brian Kelly and his wife, Paqui. The foundation has donated almost $3 million dollars to an array of charitable entities. Proceeds from Football 101 benefit breast cancer prevention, awareness and early detection initiatives chosen by Kelly Cares Foundation. Football 101 alone has raised over $653,000 for charity over its first six years.

In addition to a significant donation toward the cause, the Pokagon Band of Potawatomi Indians’ Four Winds Casinos will also provide samples of some of the dishes from its Hard Rock Cafe Four Winds. Title sponsors for Football 101 include Meijer and Saint Joseph Health System, with supporting sponsors Boling Vision Center and ABC 57.

Following check-in near the Guglielmino Athletics Complex, a reception will occur from 5-6:30 p.m. where drinks and appetizers will be provided by some of Michiana’s top restaurants. Participants will be able to meet Notre Dame’s coaching staff and browse through items for the evening’s raffle and sample A Taste of the Town.

Football 101 participants travel through a series of stations during the event. Some Fighting Irish coaching staff members will teach the basics of football form and technique, including passing, catching and kicking footballs, on the LaBar practice fields while other members of the coaching staff will teach the fundamental X’s and O’s of the game, helping participants learn overall schematic concepts. The evening concludes with the always-entertaining fashion show of athletic gear and football equipment.