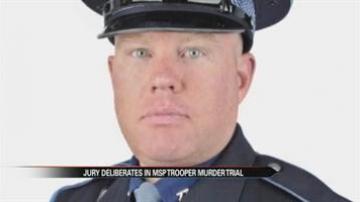 LUDINGTON, Mich. -- A jury is deliberating the fate of a man who is accused of shooting a Michigan State Trooper in the head during a routine traffic stop.

Eric Knysz is charged in the shooting that killed trooper Paul Butterfield back in September.

Knysz was driving on a suspended license that day.

"He said he was sorry but he had to do it, he had to shoot him," said Sarah Knysz.

His wife has pleaded guilty to charges that she was an accessory to a crime.

Her husband wrote in a letter to her attorney that she did everything she could the night of the murder because he had threatened to kill her.