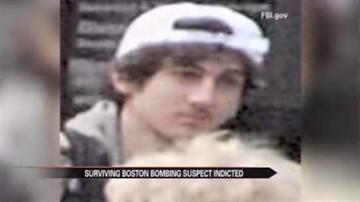 The 30 counts indictment accuses him and his brother Tamerlan of using weapons of mass destruction and killing four people.

Three died in the bombing. The brothers are also accused of killing an officer.

Tamerlan died in a gun fight with authorities.

Dzhokar was found hiding in a boat. He will be arraigned next month.