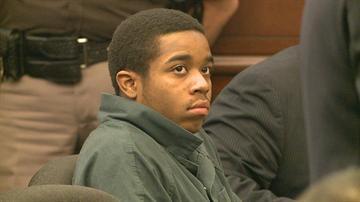 NILES, Mich. – Martell Miller, one of the five Niles teens charged with threatening to post a sex tape on Facebook if the girl in the tape didn’t perform sex acts on them, was in court for day one of his trial on Tuesday.  In his last appearance in court in November, Miller requested a speedy trial.  But, so far his trial is off to slow start.  After eight-hours of grilling the potential jury pool a jury for the trial has yet to be selected.

The jury selection process was slowed down as both side questioned jurors who had heard about the case through media coverage or through talk around Niles.  Prosecutor Steve Pierangeli and defense attorney Shannon Sible questioned jurors on what they had heard about the case and whether they would be able to disregard the information and only focus on evidence presented during the trial.

One of the biggest issues for the defense was news reports and talk about the conviction of fellow defendant Martise Washington, who was found guilty on seven charges at trial in November and was sentenced to at least 20-years in prison on Monday.  Also at issue were reports about Leon Murphy, Parnell Martin and Trey Nichols accepting plea agreements with the prosecution.

After a whole day of questioning jurors, most of which was individual questioning, there were still seven potential jurors left to interview at the end of the day.  Jury selection will continue on Wednesday, with the trial expected to start soon after the final jury is appointed.

The prosecution did reveal that they would be calling Leon Murphy and Parnell Martin to testify against Miller, Trey Nichols could also be called.