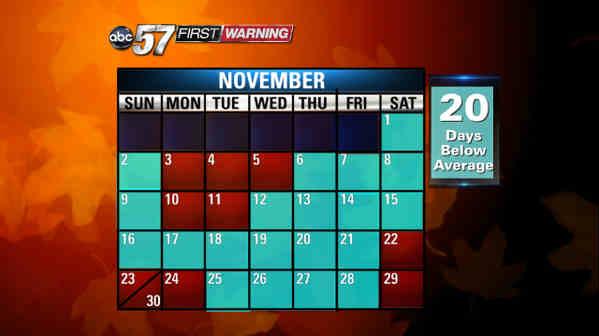 Update: Prior to this article, the official high and low temperature for November 30th was not included in the calculation of the ranking.  Since the high was 61° and the low was 40°, this dropped November 2014 from the fifth coldest to the sixth coldest on record.  The appropriate changes have been made to this article to support this statement.

SOUTH BEND, IN - Not only was the month of November ranked in the top five snowiest November's on record, it was also ranked the sixth coldest November.  Even though we topped out at 58° in South Bend on November 30th, that was one out of ten days that were above the typical average for the month.

Also, do not forget the record breaking cold snap that occurred in the middle of the month that produced a new record cold maximum temperature on November 18th of just 18°.  This record breaking cold snap included consecutive days where temperatures remained below freezing, which helped in making the average temperature over the course of the month to be just 34°, placing this month in the top five.

Speaking of the cold, it looks like the cold air returns for the first day of December, so stick with ABC57 First Warning Neighborhood Weather forecast right here for the latest forecast.