K9s getting brand new Kevlar vests thanks to non-profit 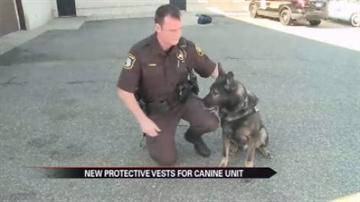 VAN BUREN COUNTY, Mich. -- A non-profit called Vested Interest in K9s is donating three vests to the K9 unit of the Van Buren County Sheriff’s Office. The vests, which are worth $900 each, are manufactured in Michigan.

Goliath and Deputy Tony Evans have been partners for 10 years, since the German Shepherd was just a pup.

There is always at least one K9 officer on duty in Van Buren County.

Protective vests for K9s have a five year warranty because the material wears down over time.

Evans says the Kevlar vests will protect his four-legged partner if a suspect tries to hit him, shoot him or stab him.

"We're very thankful for Vested Interest in K9s contributions to our department to keep our K9 units safe,” said Evans.

The Van Buren County Sheriff's Office has a fourth K9 officer in training who does not qualify to receive a vest until he finishes his training.

Once he is certified he can be put on Vested Interest in K9s waiting list.