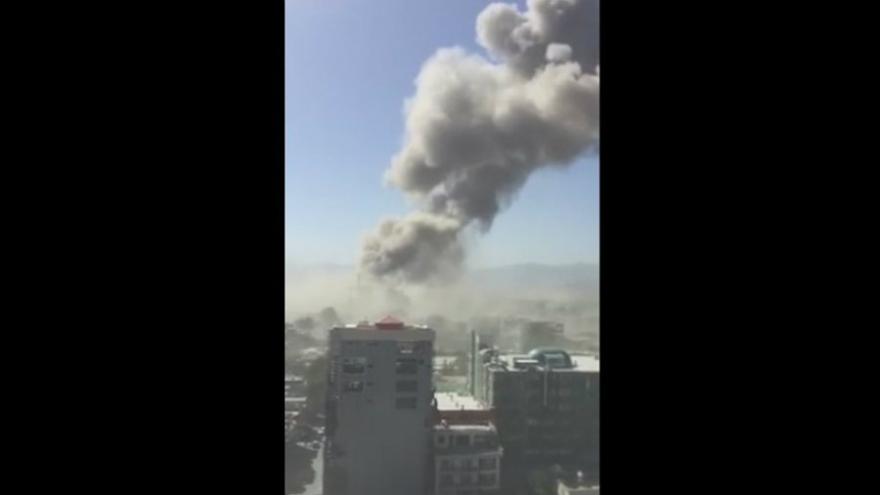 KABUL, Afghanistan (CNN) -- A huge suicide bomb ripped through a secure area of Kabul at the height of the Wednesday morning rush hour, killing at least 90 people and wounding 400, Afghan officials said.

The blast, which came a few days into the Muslim holy month of Ramadan, was one of the deadliest to hit the capital in recent years.

The bomb exploded in the diplomatic quarter near the German Embassy and the Afghan presidential palace. The streets were packed with commuters, women shopping and children going to school, and the blast appears likely to result in a high civilian death toll.

Death toll rises to at least 90, with another 400 people injured. At least 11 US citizens injured at Camp Eggers and nine Afghan security workers were killed, US officials said. US military says checkpoint prevented truck getting closer to embassies. Taliban has denied responsibility for the blast.

The bomb, concealed in a water delivery truck, detonated at 8:22 a.m. outside the offices of a major local cellphone company and a popular TV station. It hit about 400 yards from the German Embassy in one of the busiest parts of town, near big supermarkets and shops.

The Taliban denied responsibility for the attack in a statement. No group has yet claimed it.

The Wall Street Journal reporter Jessica Donati, in Kabul, said the explosion happened close to Western embassies, government institutions and the residences of high-ranking officials and their families. It's the most fortified part of the city, which can be reached only by passing through several checkpoints.

The BBC has confirmed that driver Mohammed Nazir, who had worked with the broadcaster for four years and had a young family, died in the blast. Four BBC journalists were injured, but their injuries are not thought to be life threatening, according to a BBC World Service statement.

At least 11 US citizens assigned to the US embassy as contractors were injured in the blast in Kabul, according to US officials.

German Foreign Minister Sigmar Gabriel said the attack was in the "immediate vicinity" of its embassy.

"The attack was aimed at civilians and those who are in Afghanistan to work with the people there for a better future of the country," Gabriel said. He said embassy officials had been injured but that "all employees are safe." An Afghan security officer protecting the embassy area was killed, he said.

German Foreign Ministry spokeswoman Maria Adebahr said the Kabul embassy would remain closed until further notice and that local staff were receiving medical care. A flight that was supposed to leave Berlin for Kabul on Wednesday carrying deported migrants has been canceled, the German Interior Ministry said.

The Afghan presidential palace and the Indian Embassy are near the blast site. "By God's grace, Indian Embassy staff are safe in the massive Kabul blast," Foreign Minister Sushma Swaraj tweeted.

The French Embassy was damaged in the explosion, Marielle de Sarnez, French minister for European Affairs, told Europe 1 radio. Initial reports do not indicate that French nationals are among the dead, she said, adding that she is "extremely cautious" until that has been confirmed.

Separately, the US Embassy said it did "not appear to have been the target of the blast," a spokesperson said.

Hundreds line up to donate blood

The attack seriously damaged the offices of broadcaster 1TV Afghanistan, blowing off the windows and doors. It was left in such bad shape, "you would have thought the explosion happened inside the office," said the station's owner, Fahim Hashimy.

He said the station's creative director, Sohail Sediqi -- who Hashimy said was known in the office for his fear of such attacks -- had gone down to the blast site to try to get footage on air right after the bomb went off, despite an injury to his forehead.

"This gave me a very big hope, to be honest. It showed me that we won't give up," said Hashimy.

Layma Tabibi, an Afghani-American who works at a local consulting firm, heard the blast and told CNN a lot of the casualties appeared to be from the Roshan telecommunications company.

Many phone lines are down but people are trying to help, she said.

"The people are full of hope and love. It may not always seem like that but already there are hundreds of names and people waiting in lines and waiting to be put on a waiting list to donate blood and help anyone who is in need or stranded without help."

Hameed Hakim, who works for a French nonprofit group, was on his way to work in Kabul's Wazir Akbar Khan neighborhood when the noise of the blast stopped him in his tracks.

"It was so crazy. The sound was very strong and the ground shook. Everyone around me was shocked. All of the buildings and offices were broken, the windows were blown out," he said. "It was rush hour, most of the people were going to their offices or going to the shops. There were large crowds of people going about their days."

Josh Smith, a correspondent for Reuters news agency in Kabul, headed to a major city hospital just a few blocks away from the blast site.

"I saw a steady stream of ambulances that had been carrying wounded begin arriving with bodies, many of which were burned or maimed beyond recognition," he said.

"Frantic relatives were mobbing casualty lists and the arriving ambulances looking for news. Several of the wounded who were able to talk to me described utter destruction and chaos after the blast. All over streets blocks away people were cleaning up broken glass."

Emergency workers were still pulling bodies from under the rubble and a number of buildings had collapsed.

"I heard a very loud bang and then I don't remember what happened next," said survivor Wasim Shah, 40, from a hospital bed, his head bandaged. "The waves of the explosion were so powerful that you can see a lot of people in the hospital wounded by shattered windows and collapsed walls."

Capt. Bill Salvin, a US military spokesman in Kabul, told CNN that a checkpoint had prevented the truck getting closer into the diplomatic quarter.

Attacks of this kind "tend to be signs of weakness" because forces that are not winning on the battlefield can easily build a vehicle bomb and drive it into a city center, he said.

"Today's attack is a very dramatic example of what terrorists can do when they are determined to cause death and suffering among innocent civilians," he said. "But the security situation is being stabilized by the ever-growing capability of the Afghan police force and the Afghan National Army."

The latest attack highlights the deteriorating security situation across Afghanistan.

Earlier this month, another attack targeted foreign troops near the US Embassy in Kabul, killing eight people. ISIS claimed responsibility for that attack.

The Pentagon is considering sending additional troops to the country, US military officials told the Senate Armed Services Committee this month.

The troops could consist of special forces personnel and more conventional soldiers, and would be part of the NATO-led mission to train, advise and assist the Afghan army in its fight against militants.

There are about 8,400 US troops in Afghanistan -- the majority are involved in training and advising Afghan troops. About 2,000 US service members participate in a counterterrorism mission that targets terror groups such as al Qaeda and ISIS.

US troops have been in Afghanistan for nearly 16 years, where the government and coalition allies are battling several terror groups, including the Taliban and ISIS.

This story has been updated to correct the spelling of Fahim Hashimy's name.