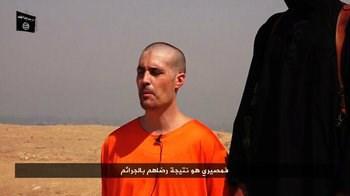 Hillary Clinton's running mate and Diane and John Foley talked in person in the lobby of the Manchester, New Hampshire, Radisson Hotel. That's about an hour from their Rochester home, ahead of the Virginia senator's appearance at St. Anselm College.

Foley was held in ISIS captivity for nearly two years, and was beheaded by the group in a video posted to YouTube in August 2014.

The meeting was not an endorsement of the Clinton campaign, per an aide, but an opportunity for the Foleys to tell Kaine about their work with the James W. Foley Legacy Foundation, as well as their experience with their son.

The Foleys have been critical of United States hostage policy.

One month after his death, Diane Foley told CNN's Anderson Cooper she was "embarrassed and appalled" by the United States government.

"I think our efforts to get Jim freed were an annoyance" to the US government, Diane Foley said. "It didn't seem to be in (U.S.) strategic interest, if you will."

In February 2015, John Foley called for a specialized hostage unit across government departments to increase the amount of information shared with hostage families.

"For a year-and-a-half, almost two years, we were told, 'Jim is a high priority, we're doing all we can. We can't tell you anything because it's all classified.' So we had no idea what was going on," Foley said on CNN's New Day at the time.

"We were too quiet. We followed a policy of secrecy, initially at the request of the captors and our government. Eventually we became frantic and went public."

The Foleys have interacted with members of both presidential tickets. Donald Trump presented Foley with a posthumous Nackey S. Loeb First Amendment Award in November 2014, seven months before he joined the 2016 race.

According to the New Hampshire Union Leader, Trump said Foley "was far more brave than I'll ever be," and presented a $25,000 check made out to the James W. Foley Legacy Fund to Foley's parents.