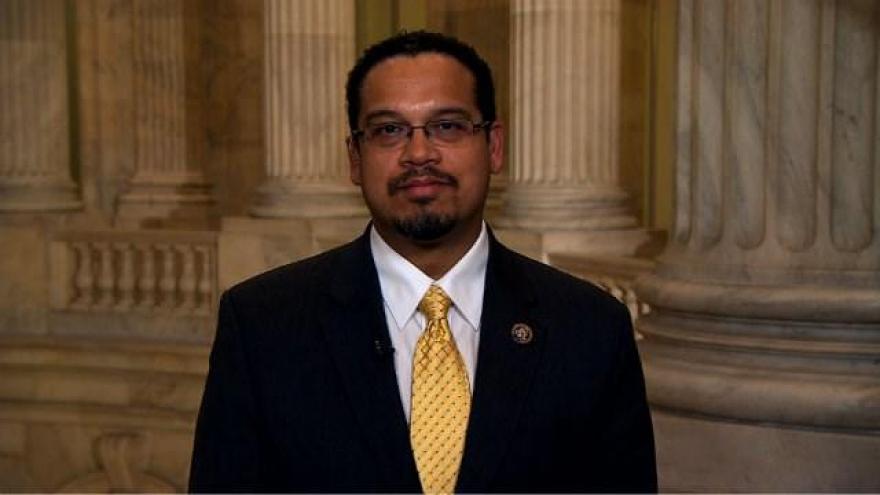 "We're going to call upon everybody to give all the resources they have," the Minnesota congressman said at a Huffington Post forum featuring the seven candidates to chair the Democratic Party.

Ellison said Democrats are "in an emergency" as they face the beginning of Donald Trump's presidency. "Everybody has to give up what they have to maximize turnout and agency and organization," he said.

His comments address a critical question many establishment Democrats have as they select a new DNC chair: By selecting the Sanders-endorsed candidate, can they also secure his young, progressive wing of the party?

Five other candidates -- including Pete Buttigieg the mayor of South Bend, Indiana -- hoping neither can win enough of the 447 voting members' support to clinch the job.

Ellison, who is Muslim, said he'd worked to smooth over tensions with top Democratic donor and Clinton ally Haim Saban -- who had called Ellison anti-Semitic.

He said the two had spoken by phone in a call he said was "amicable."

"I think we're on the road to recovery in that regard," Ellison said.

His comments come six weeks after Saban, who gave millions to Clinton's presidential campaign, lambasted Ellison at the Brooking Institution's Saban Forum, an annual gathering between American and Israeli political leaders, during a question-and-answer portion of a conversation with Israeli Defense Minister Avigdor Lieberman and moderated by CNN's Jake Tapper.

"If you go back to his positions, his papers, his speeches, the way he has voted, he is clearly an anti-Semite and anti-Israel individual," the Israeli-American Saban said. "Words matter and actions matter more. Keith Ellison would be a disaster for the relationship between the Jewish community and the Democratic Party."

It was a reference to Ellison's past association with the Nation of Islam, including his defense of the group's leader Louis Farrakhan.

Hit Trump with a 'two-by-four'

Perez, meanwhile, took a hard line toward Republicans on Capitol Hill and Trump, in particular -- saying Democrats should hit the soon-to-be president "between the eyes with a two-by-four."

He said Democrats should "treat him like Mitch McConnell treated Barack Obama" -- a suggestion that minority Democrats in Congress should use every ounce of power they can muster to stymie Trump's legislative agenda.

Perez was also critical of the caucus process, saying Democrats need to make sure voters aren't excluded from state elections just because of their work schedules.

"I hope we can find a way to integrate the idea that you just shouldn't have to win the boss lottery," he said.

Buttigieg sold himself as untainted by the 2016 Democratic primary, and touted his mayoral victories in the red state of Indiana.

The candidates spent much of the night discussing issues on which they broadly agree -- including the party's need to protect voting access -- underscoring just how much the race is a fight over resumes and candidates' affiliations.

Asked if they considered themselves progressive, all seven candidates' hands shot up.

"I agree with every single word from everyone on this stage. We are unified on 99% of this," Buckley said.

Democrats will select their next chair in a February meeting in Atlanta.