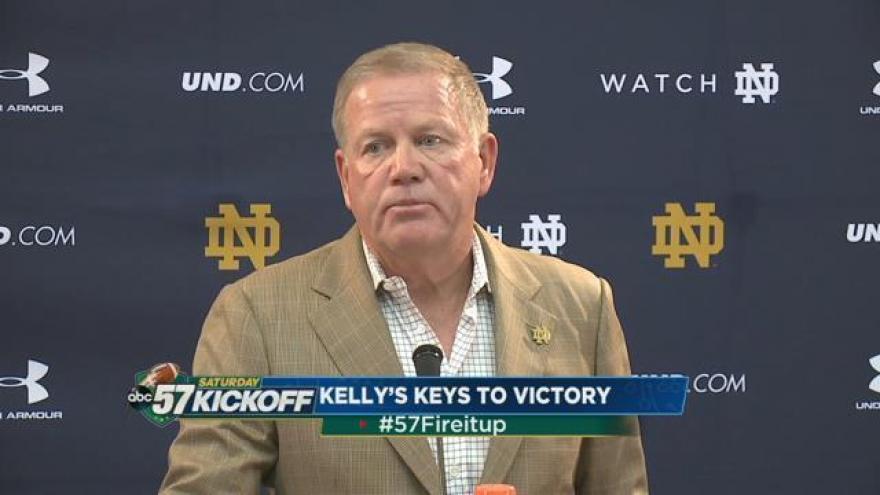 Brian Kelly and Notre Dame have had a full week to mull over what happened at week ago at Notre Dame Stadium, but it's time to move to the next opponent.

The Duke Blue Devils are coached by David Cutcliffe, who is well known for his development of quarterbacks such as Peyton and Eli Manning. This is a little more of a challenge with a redshirt freshman quarterback starting Saturday.

With Cutcliffe though, it's always next man up.

"They lose their starter but Daniel Jones has been as good as any freshman quarterback in the country in terms of running their offense so very diversified on offense, they can run it, can throw it. Got some nice weapons, do a lot of things on offense," Head Coach Brian Kelly said.

His weapons include Jela Duncan at running back, T.J. Ramming and Jonathan Lloyd at wide receiver. Kelly doesn't look at the stats with these playmakers but their experience.

"They've got 85 scholarship players and all of them are seasoned players. They played in a bowl game, won in a bowl game last year and certainly you know have," Coach Kelly said.

Kelly's defense should receive a boost from playing Duke's offense but Kelly knows it's only what his team can control that will determine their progress.

"Lot of respect for Duke but we really got to clean up our game and we've got to be able to play with that sense of urgency for four quarters against another really good opponent," Coach Kelly said.

Now for Duke's defense. Notre Dame's offense has rolled through the first three weeks so don't expect it to stop today, but an underrated Blue Devils defense awaits.

Duke brings an experienced defense to Notre Dame, one that gets after the quarterback and likes to be opportunistic in the secondary.

One veteran, Devon Edwards, has the ability to affect the game not only on defense but also on special teams..

"Four touchdowns plus, he's a guy we're aware of and we have to take special note of him in special teams," Coach Kelly said.

Which begs the question, will Kelly kick to him?

"Absolutely. And then maybe not," Coach Kelly said.