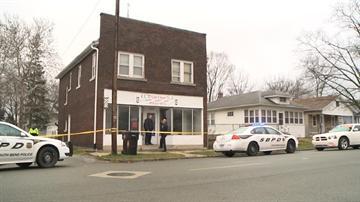 SOUTH BEND, Ind. -- Police are still on the lookout for a man who shot and killed 49-year-old, Darrell Laurence, in South Bend Saturday. The shooting happened shortly before 10:30 a.m. near a popular barber shop on Kemble Avenue.

"They need to clean up South Bend. Period," resident Jessica Murry said. "With all the dope dealers, it's just too much."

She had just picked up her grandmother for a quick run, and returned to see police investigating a murder on Kemble Avenue just a few doors down.

"We saw the police and stuff, and I asked the officer, 'What happened?,'" Murray said. "To which the officer said, ' Somebody just got shot,' and I'm like, 'Wow, we had just left.'"

Police said a 49-year-old Darrell Laurence was shot and killed in the apartment complex behind a popular barbershop.

But the violence may have spilled over inside.

"Officers arrived, and were able to secure the scene, and acquire information that it was a black male suspect," Tim Corbett, Metro Homicide Commander, said. "Possibly wearing a leather coat and a black hoodie, and fled the immediate area."

Police are still searching for that suspect this evening.

He didn't want to go on camera, but said it's unfortunate what happened, and hopes it doesn't affect business.

Neighbors are hoping to find answers quickly, and stop a killer wandering their streets.

"I'm glad she wasn't here, because there's no telling what could've happened to her," Murry said.