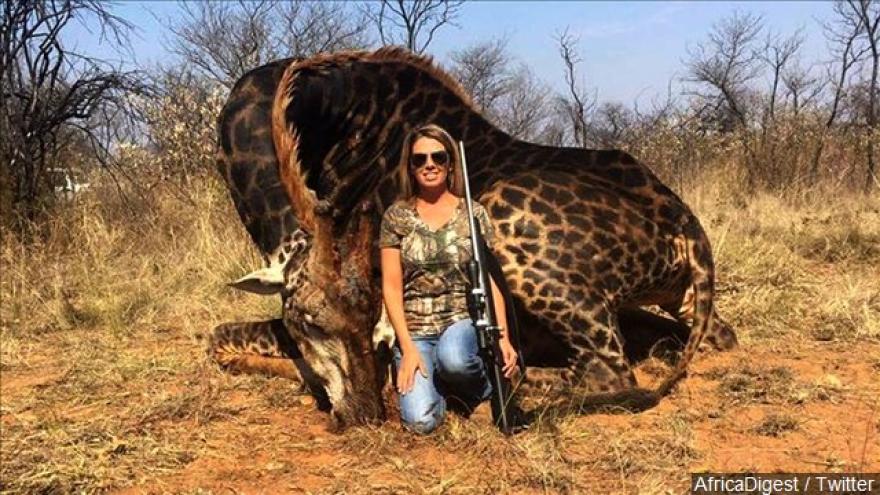 Tess Thompson Talley, a female hunter from Kentucky, showing off the results of her \"dream hunt:\" a dead black giraffe in South Africa. Talley has now responded to the backlash that came from the viral image. Photo courtesy AfricaDigest / Twitter

LOUISVILLE, Ky. (AP) — A Kentucky woman vilified on social media for killing a giraffe on a 2017 hunt in Africa said she has received thousands of angry messages and death threats.

A photo of Tess Talley posing with a large giraffe went viral this week after the Twitter account of a site called Africa Digest posted two photos and called her a "white American savage."

Media report that Talley is from Johnson County in eastern Kentucky. She issued a statement this week saying the giraffe was not rare and she was participating in what she called "conservation through game management."

She says in the statement "some of the most vile things have been directed at me and many other women hunters."

Talley has been criticized on social media by celebrities such as Ricky Gervais and "Will and Grace" actress Debra Messing, who called her a "disgusting, vile, amoral, heartless, selfish murderer."

The photos posted by Talley last year show her standing and smiling beside a dead giraffe along with the caption: "Prayers for my once in a lifetime dream hunt came true today!"

Trophy hunting is a legal practice in many African countries.

She claims in her statement that the giraffe was over 18 years old and had killed three other younger giraffes that were of breeding age.

"I get that hunting is not for everyone," she said in the statement, but "if it was any other belief that was different, threats and insults would be deemed hideous, however for some reason it is ok to act this way because it's hunting."