Kids lost weight but 'took care of themselves' in Thai cave 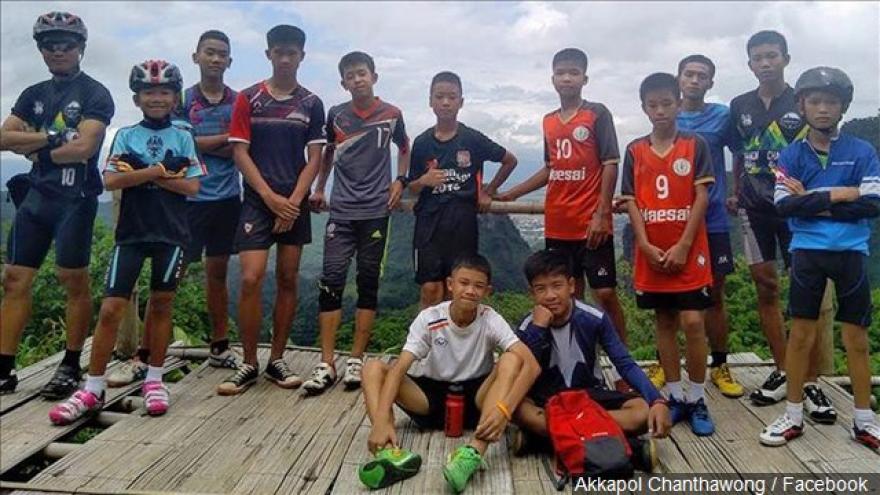 All 12 boys and their soccer coach were rescued Tuesday, ending the grueling 18-day ordeal that claimed the life of an experienced volunteer diver and captured the world\'s attention. Photo courtesy Akkapol Chanthawong / Facebook

MAE SAI, Thailand (AP) — The soccer teammates rescued from a flooded cave in Thailand lost weight during their 18-day ordeal but had water while they were trapped and are in good health, a health official said Wednesday.

The 12 boys and coach rescued over the three previous days "took care of themselves well in the cave," Thongchai Lertwilairatanapong, a public health inspector, said at a news conference at the hospital in Chiang Rai city where the group is recovering.

The four boys rescued Sunday can eat normal food and walk around, and the four pulled out Monday were eating soft food. Thongchai said one member of the final group of four boys and the coach who arrived at the hospital Tuesday evening had a slight lung infection.

Two of the first group had a lung infection as well, and Thongchai said they would need medicine for seven days.

The average weight loss was 2 kilograms (4.4 pounds) for those with known information, Thongchai said. They were able to obtain water dripping inside the cave.

The group had entered the sprawling Tham Luang cave to go exploring after soccer practice on June 23, but monsoon rains soon filled the tight passageways, blocking their escape. They were found by a pair of British divers 10 days later, huddled on a small, dry shelf just above the water, smiling with relief but visibly skinny.

The complex, high-risk mission for international and Thai divers to guide the boys and coach through the cave's flooded and tight passageways had riveted people worldwide. Highlighting the dangers, a former Thai navy SEAL volunteering to work on the rescue efforts died Friday while replenishing oxygen canisters that were placed along the escape route.

Each of the boys, ages 11 to 16 and with no diving experience, was guided out by a pair of divers though rocky, muddy and water passages that in places were just a crawl space.

The method was extremely risky, but dwindling oxygen levels in the cave and fears of more monsoon rains to come made a decision urgent. Relatively mild weather and a massive effort to pump out water created a window of opportunity. And the confidence of the diving team, and expertise specific to the cave, grew after its first successful mission Sunday.

The boys were in isolation in the hospital to prevent infections by outsiders. But family members have seen at least some of the boys from behind a glass barrier, and after a period of time with no problems, the family members would be allowed closer while dressed in sterilized clothing.

Health officials have also previously said the boys would get a mental health evaluation, to address any problems caused by their ordeal. Outside experts have said the group identity of the soccer teammates and their youth would aid their ability to recover.

In a nationally televised address, Prayuth said that the government's efforts, the assistance of people in Thailand and abroad, and the outpouring of moral support made the mission a success. He also acknowledged the loss of a former navy SEAL, Saman Kunan, who died last week while replenishing air tanks inside the cave.

"His honor, sacrifice and legacy will forever be in our hearts," Prayuth said.