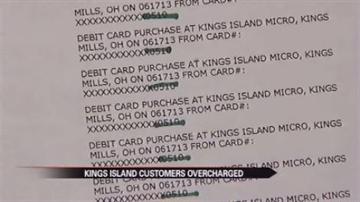 MASON, Ohio -- Some customers at Kings Island are saying their credit cards were charged multiple times.

Park visitors who checked their bank accounts Thursday were surprised to find hundred of dollars of charges from purchases made on Sunday.

One park-goer received a statement from this bank claiming he was charged $270, 13 times.

A Kings Island spokesman responded to the complaints saying there was an error in how they processed the credit card requests. He said they are working to reverse those mischarges.