Kosciusko County digging out from foot of snow 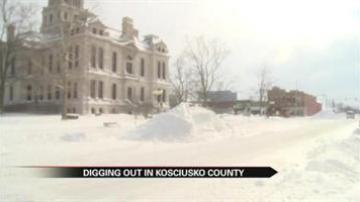 WARSAW, Ind. -- Kosciusko County declared a state of emergency after twelve inches of snow fell in the county in less than 24 hours. Plow drivers - and even volunteers - are working to dig the city out.

"You should have seen it this morning. Over there at the courthouse there's like two feet of snow drifted on the stairs all of the way up and we had to shovel it all down. We've been out here since 5 a.m. working on it," said volunteer Charles Hall.

Kosciusko is trying to dig out from under a foot of snow that fell in less than 24 hours.

"The north portion of our county seems like we've had quite a bit more since it started coming down quite considerably heavy in the morning hours," said Sergeant Chad Hill of the Kosciusko County Sheriff's Department.

Many cars are stranded because of drifting snow.

"With some of the wind blowing and as much heavy snow between the 10-12 inches we probably received in Kosciusko, it's been a difficult time for the plows to actually get through with some of the vehicles that have been buried in some of the drifts," said Hill.

County Road 150 West was so dangerous, part of it was shut down.

"There's a lot of drifting, heavy snow, just because the nature of that hill area there it's very treacherous and there's an extremely large amount of traffic that comes off of US 30 and into the industrial portion of our county on the west side," said Hill.

Hall says he will be happy if he doesn't see another snowflake this winter.