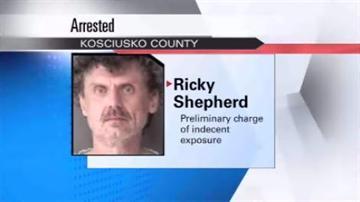 KOSCIUSKO COUNTY, Ind. — A Leesburg man accused of exposing himself to his neighbors was arrested early Wednesday morning.

At first police were unable to find him, but around 3 a.m. Wednesday they found Shepherd and took him into custody.

He was booked on a preliminary charge of indecent exposure, fondling with an intent to be seen by others and disorderly conduct.