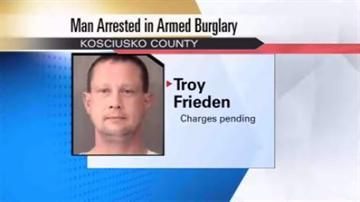 KOSCIUSKO COUNTY, Ind. -- A Kosciusko man is in jail after police said he broke into his ex-girlfriend's home.

Troy Frieden, 38, was found inside the home on East Pierceton Road on Monday afternoon.

Police said he had two weapons with him and said he fired several rounds into his ex-girlfriend's car and inside her home.

She was not home at the time.

Frieden was treated for cuts at a local hospital before being taken to the Kosciusko County Jail.

Police said he could face burglary and criminal recklessness charges.