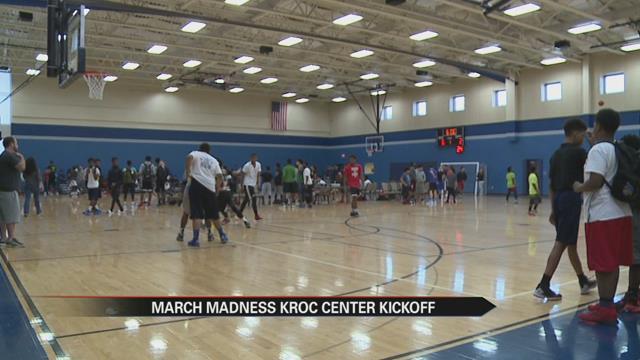 The Kroc Center in South Bend held an event for teenagers to kick-off March Madness on Friday.

The event drew in over 150 teenagers. Offering them a safe place to watch and play basketball.

Event organizer and youth pastor John Blanchard says basketball has proven to be a great way to reach teens.

“If we can get them interested in a way such as basketball then we start to be able to open the doors for us to be able to reach out to their families and help in any situation and help build them up as quality people and that’s just something you can’t ask for any more than that,” said Blanchard.

“They shower you with praise and they help you. It’s so important because if you didn’t have that you would just give up,” said 18-year-old Shavonte Hardin.

Hardin almost gave up as a junior in high school. He was considering dropping out.

“It was one of those times. Hard things going on, hardships and I just wanted to give up but they kept me pushing, helped me go through it,” said Hardin.

Hardin says with the support and mentoring from the Kroc Center he stuck in school. He recently enlisted in the Air Force.

Blanchard says it’s those positive transformations he and the center hope to inspire.

“So many kids come through and grow up and the lives that they’re living have been changed dramatically from the programs that we offer,” said Blanchard.

For more information on the events and programs at the Ray and Joan Kroc Corps Community Center, click here.