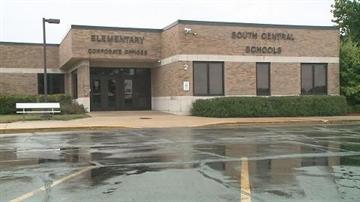 UNION MILLS, Ind. – A teacher with the South Central School Corporation in La Porte County is in hot water after showing up for school drunk, according to a police report.

According to a report made by Deputy Michael Disbrow with the La Porte County Sheriff’s Office, the school’s music teacher, Matthew Rhodes, was given a breathalyzer test at the school. The results of the test showed Rhodes had a blood alcohol content level of 0.343 percent.

The legal limit for determining if a person is intoxicated is 0.08 percent; Rhodes BAC was more than four times that.

According to the report, Rhodes had admitted to the school’s principal Alicia Schnick that he had drank half a pint of vodka before school. Disbrow observed Rhode squinting his eyes and noted that his speech and walk were normal.

According to a parent with a student at the school, Rhodes may have lost a close family member recently. Another says he has been removed from his position at the school.

Thursday, a phone call to the school corporation’s office was taken but no information was provided. The receptionist said she was not even allowed to take a number for the superintendent to call back if it was related to the Rhodes incident.

Many parents had not heard about what happened at the school yet, even though it had occurred several days earlier. Some voiced concerns that the school did not share the basic information with them, since Rhodes classes were a part of many of their student’s educational curriculum.

The school corporation has a strict zero-tolerance policy for students. Parents think it should be the same for those charged with educating them as well. “You know we try to teach our kids not to do it, so you hope that the people that are in charge of them follow the same guidelines,” said Eric Snyder.

A large number of parents were angry and didn’t accept a personal crisis as a reasonable excuse for such behavior. “We’ve all had that happen,” said Edward Muffett. “He has a phone, I’m sure; he could have called off that morning before he came in… He should be fired and never be able to teach again.”

Other parents took a different approach, saying they disagreed with Rhodes supposed or potential termination. While some say, forgiveness is the right approach. “I think a guy deserves a chance to re-evaluate his life and maybe make a return. Maybe this is a one-time thing,” said Larry Knowlton.

Finally, some parents voiced concerns about how he arrived. Rhodes lives about 25 minutes from the school. If his BAC was indeed that high after allegedly drinking half a pint of vodka, some wonder what it was while he was driving to the school.

According to the police report, Rhodes would have to give a blood sample at the hospital per the school corporation’s regulations. The La Porte County Sheriff’s Office has applied for an arrest warrant for Rhodes on the charge of Public Intoxication.