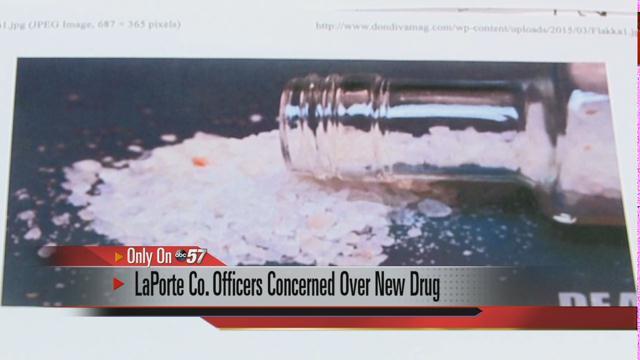 Police in LaPorte are worried about a new drug that could be making its way to the area.

Officers were briefed on Friday about what's being called Flakka.  It's very similar to bath salts, and even though it hasn't been seen in Michiana yet, officials are worried because it has already been seen in Chicago.

The new drug is called a-PVP, a powerful hallucinogenic known on the streets as Flakka or Gravel.

"Its effects are very similar to bath salts, which is a synthetic drug that we've seen," says a commander with the LaPorte County Metro Operations Unit who needs to remain anonymous.

The new drug hails from the windy city.

"Every drug that we know, that becomes popular in Chicago, we almost immediately see it here," says the commander.

La Porte's proximity to Chicago plays a big role in the drug trafficking between the two cities, with the easy access to several major highways including Interstate 94 and the Toll Road.

"Chicago is a major hub nationally for narcotics," says the commander.

He says his team has been cracking down on La Porte's biggest drug problem.

"We're seeing an epidemic level of heroine use," says the commander.

And as they work to solve that problem, they worry it's more of an opportunity for Flakka, or Gravel, to show up in La Porte, which means starting Friday, the drug task force will be keeping an eye on this new drug as well.

"We continually to aggressively and proactively combat the drug problem in this community," says the commander.