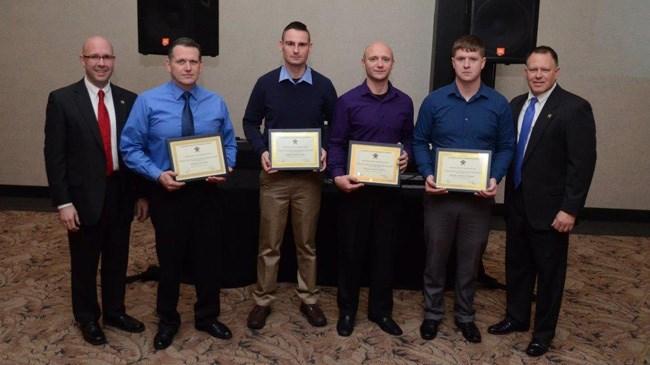 The La Porte County Sheriff's Office held a holiday gathering on January 9th where they celebrated the accomplishments of the past year and presented awards.

“We were very pleased with the hard work and performance of our deputies this past year and felt that hosting this event so that they could enjoy an evening with their spouse and colleagues would be very appropriate”, stated Sheriff Boyd. “In the past year we have worked hard ay building trust within our communities and with the citizens of La Porte County and I firmly believe that our deputies have helped achieve that success. This gathering was a good opportunity to also recognize several of our staff members that were involved in incidents where extraordinary work brought a positive outcome. Twice in 2015 La Porte County Deputies were faced with armed, suicidal people; those extremely dangerous and tense situations were resolved with true professionalism. Having witnessed the positive outcome, our administrative staff knew it would be appropriate to create an award for meritorious service. We are proud of all of the hard working men and women of the La Porte County Sheriff’s Office, from the most senior deputy to the newest hired jail deputy, we will strive to be even more productive in the coming year.”

These deputies received a commendation for meritorious service for an incident involving a suspect firing a weapon in a home in Hudson Lake on December 30th.

These deputies received a commendation for meritorious service following a stand-off with an armed robbery suspect on I-94 which occurred on February 27th.

Those that received awards for meritorious service were presented with a certificate that outlines their achievement and will also be authorized to wear a Meritorious Service pin on their class A uniform.