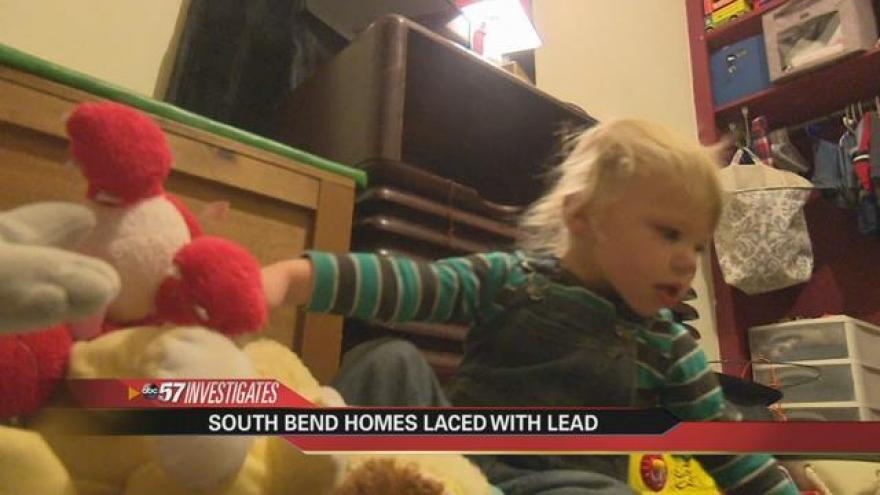 It's a perfect picture snapshot of the American dream. College sweethearts and their first born son, living in their very first home, nestled in a growing Midwest neighborhood.

It was an ideological move for them, moving into a neighborhood in a developing city.

But things aren't always what they seem.

"We found out that our toddler son at two-years-old, was diagnosed with high lead levels," explains Brittany Griffith.

In 2009, David and Brittany Griffith moved into this Near Northwest neighborhood home.  It wasn't until they began to notice their son, Atticus, having difficulty speaking issues with his growth and development, that they learned that these walls were laced with lead.

It's not something that crossed their minds.

"I was never informed that our county had a health, lead issue, let alone hazard and poison. I never ever heard it," adds Griffith.

Their nearly 100-year-old home is one of the countless in the country, that are considered hazardous.

The dust from the deteriorated paint is the big problem.  Although it may seem like a simple fix, ABC57 news learned, it's anything but that.

"It's a concept of do we buy two gallons of paint and three refillables of swiffers, or a box of diapers," says Griffith.

They call their lifestyle, "conditional living."  They vigorously clean daily, trying to rid their home of the lead-paint dust.  But even then, it's not enough.

"It's so ambiguous on how to address properly," says David Griffith. "If our house was a car, it'd be totaled. Because replacing all of the siding, redoing all of these walls...we are currently painting but even with 2-3 coats of paint, it could still test positive."

There's also a lack of awareness, and a lack of funding. There's no state mandate to ensure every young child gets tested for lead.

ABC57 spoke with Dr. Luis Galup of the St. Joseph County Health Department, who said there is no state mandate requiring children to get tested for lead.

"I wish that every child, especially from birth until seven years of age, would get tested," he says. "But there is no mandate."

Although Medicaid does require children to get tested for lead at ages one and two, it's not being pushed.

And the effects can be serious.

Friedman says the impact of lead can be serious, resulting in learning disabilities, growth and development problems, and even behavioral problems and juvenile delinquency.

"It's very stressful, because I feel like the longer we're here, the more sick he's going to be," says David.

It's a vicious circle.

The low percentage of testing makes getting funding to fix the problem, more difficult.

"We're putting them at a disadvantage, when you know there is something that can be corrected," explains Galup. "But it's not corrected because our government fails to provide the necessary funding to detect the problem and then treat the problem."

South Bend used to have a grant from the Department of Housing and Urban Development, but it did not qualify for the renewal after it dried up in 2015.

That money was used for testing and repairing some homes.

In order to receive the Lead Hazard Control grant, applications detailing a plan of action have to be submitted. But not everyone who qualifies for funding, receives one.

There's just not enough money to go around, according to representatives from HUD.

But even then, the HUD grant wasn't meant to be a cure-all.

"We allow a limited amount of work on the housing to make sure that the source of the problem does not repeat itself," says Friedman. "But they're not general rehabilitation grants."

Although South Bend does have a home improvement program available for low-income families in unsafe conditions, it's competitive with limited funds.

This leaves the Griffiths, and so many others, stuck.

"What more can she be doing," asks David.

"What actions were the ones that I regret?," adds Brittany.

Past and future actions that all have consequences.

It has the Griffiths weighing their options, as they make more decisions about their family.

"We have to start talking about, do you want to currently keep having children, knowing that we're living in this situation," says Brittany, wiping away tears.

But it's also a concern for the community.

"We have to start addressing this quickly and quietly, and get it done. Because it's going to start showing that the cracks in the system weren't just from one area and one person.  It's a very multi-faceted issue, and we have to fix it so we don't turn into Flint," says Griffith.

The Near Northwest Neighborhood Community Center is having another forum regarding the lead problem, on February 8th at 6 p.m. The community is asked to attend, so that they can learn how to prevent lead poisoning in their own children.