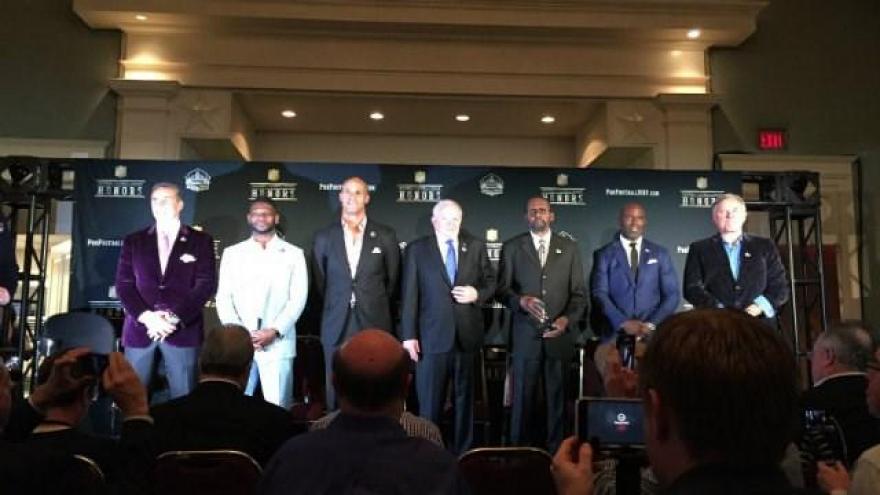 HOUSTON (CNN) -- The Chargers may no longer be in San Diego, but longtime fans of the Bolts have reason to celebrate, as iconic Chargers running back LaDainian Tomlinson was among the group elected to the Pro Football Hall of Fame on Saturday.

The class was announced during the taping of NFL Honors, a two-hour prime-time awards special held at the Wortham Theater Center in Houston. The group will be enshrined in Tom Benson Hall of Fame Stadium in Canton, Ohio, in August.

Tomlinson -- who is originally from Rosebud, Texas, a little more than 150 miles away from Houston -- said he "got emotional right away."

"I just thought about the journey," a red-eyed Tomlinson said. "I thought about being a small-town kid from up the road, to now going to Canton, Ohio."

Warner's journey is one of the most improbable stories in the Hall of Fame's history. The quarterback went from working the aisles in a grocery store to winning two NFL MVP awards and a Super Bowl MVP trophy when the then-St. Louis Rams defeated the Tennessee Titans in Super Bowl XXXIV.

This was Warner's third year of eligibility; all three times he has been a finalist.

"Now that it's all said and done ... thank God you didn't change the story," Warner said. "I don't want to have a story that everybody else has."

In addition to Tomlinson, Taylor, a defensive end who spent the majority of his career with the Miami Dolphins, also was elected in his first year of eligibility. By the time he retired after a 15-year career, he had 139 1/2 career sacks, which at the time ranked sixth in league history, and was named the NFL defensive player of the year in 2006.

Taylor said he and his family, who were waiting in a hotel room, were "stunned" when the knock came on his door that he had been elected.

"I've kind of been speechless ever since," he said.

As for Davis, a running back who won two Super Bowls with the Denver Broncos, he wasn't sure if this would be his year. It was his 11th year of eligibility and third year as a finalist. He had the feeling he was getting close, but with Tomlinson on the ballot, he had started looking ahead to 2018.

"I knew he was going in," Davis said. "I really thought there was no way they would put two backs in the same class, especially a guy who's a first-ballot Hall of Famer versus a special-circumstance guy like me, as I sort of created that. I thought that's what they saw me as. So when I got the knock, obviously, I was shocked."

Andersen, who was born in Struer, Denmark, said he barely spoke English and didn't know anything about football when he came to the United States in 1977. What eventually followed was an NFL kicking career that spanned 25 seasons.

"They said, 'You know, you just gotta kick and run off the field, and that's what I did for 25 years," Andersen said.

There was a notable name missing from this year's class, as wide receiver Terrell Owens missed getting in for the second consecutive year.

"HOF is a total joke," Owens, in his second year of eligibility, said in one of his tweets. "Honestly, doesn't mean anything to me to get in beyond this point."

There were 18 finalists for this year's class, 15 of which are from the modern era. Of the 15, seven were first-time finalists.

In addition to the modern-era finalists, there also was one senior finalist in Easley, who was a safety for the Seattle Seahawks in the 1980s, and two contributor finalists in Jones, who owns the Dallas Cowboys, and former NFL Commissioner Paul Tagliabue.

The Pro Football Hall of Fame's current bylaws stipulate that between four and eight new members are to be chosen each year. No more than five modern-era finalists can be elected in a given year, and 80% of the vote is needed for election.

To be eligible, modern-era players and coaches must have last played or coached more than five seasons ago. Since contributors do not need to be retired to be eligible, there was no specific year of eligibility for Jones or Tagliabue.

In addition to the Hall of Fame announcement, the NFL and the Associated Press named their annual award winners at NFL Honors. Included in those awards, Atlanta Falcons quarterback Matt Ryan was named the NFL MVP as well as the offensive player of the year.