Lake Michigan water levels are on the rise

NOW: Lake Michigan water levels are on the rise

Lake Michigan has been on the rise since the month of April. After the waters from the historic February flooding finally found their way to the lake, we've noticed water levels climb slowly throughout the summer season. Actually, this was evident last year as well. Spring rainfall eventually makes it to the Great Lakes, causing those numbers to climb through the entire summer season before falling during autumn. 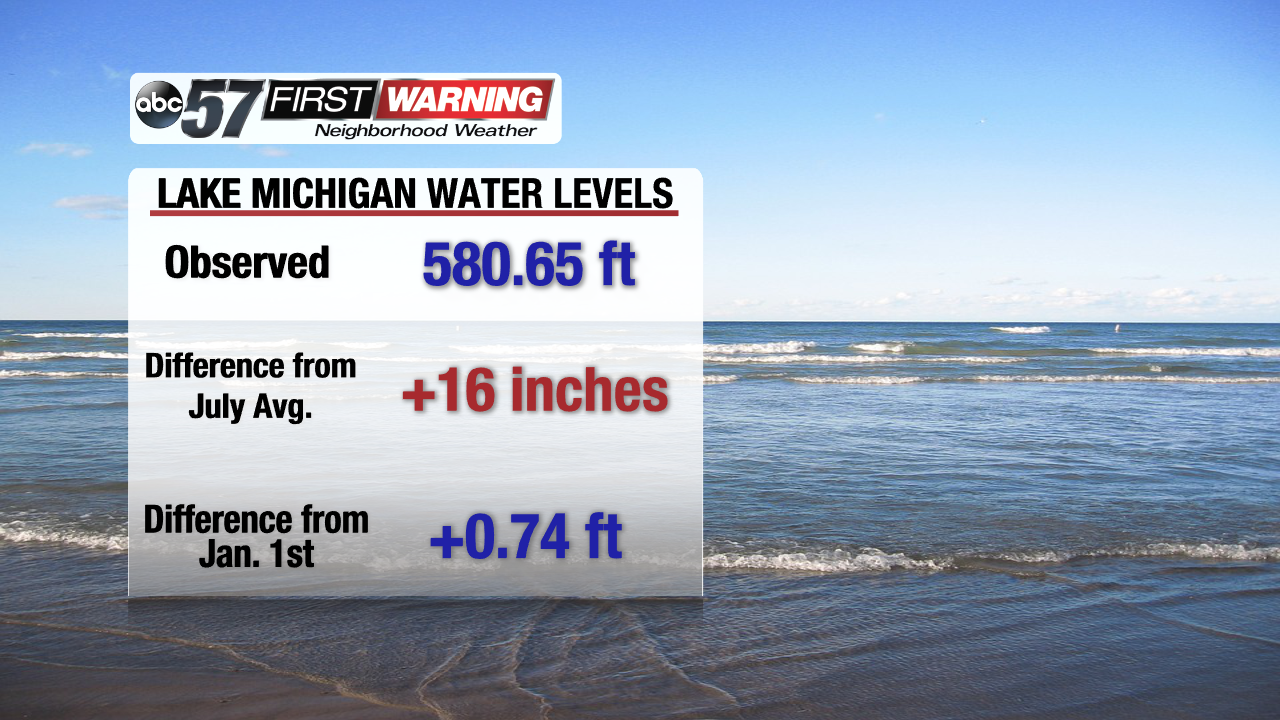 We're currently at 580.65 feet for Lake Michigan water levels. That's 16 inches higher than normal for this time of July.

As of yesterday, Lake Michigan levels were around 580.65 feet. This is not too far away from this time last year, but compared to the long-term monthly average for July, we are 16 inches above normal. Since January 1st of this year, we have climbed from 579.91 feet to 580.65 feet today. That's only an increase of 0.74 feet, but that is still a tremendous amount of water. 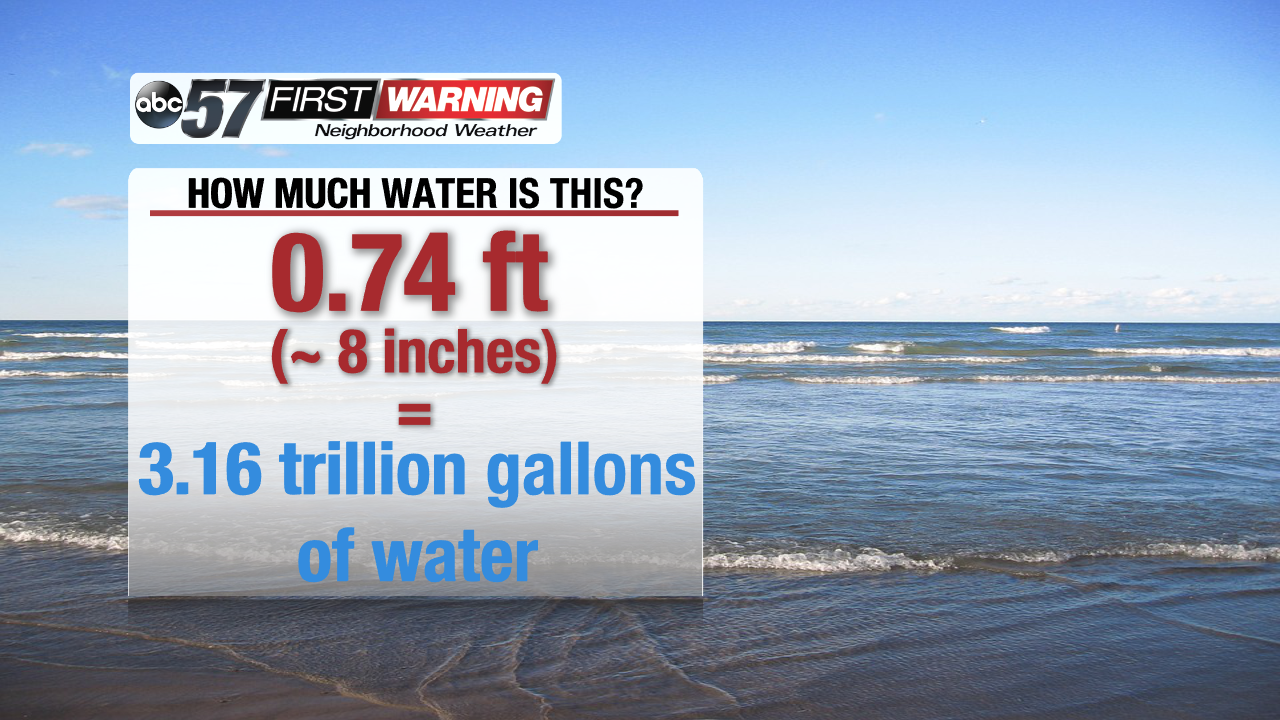 That 0.74-foot change from January 1st to today equates to an incredibly large amount of added water.

That slight level rise translates to about 3.16 trillion gallons of water, which is just a mind-boggling amount. 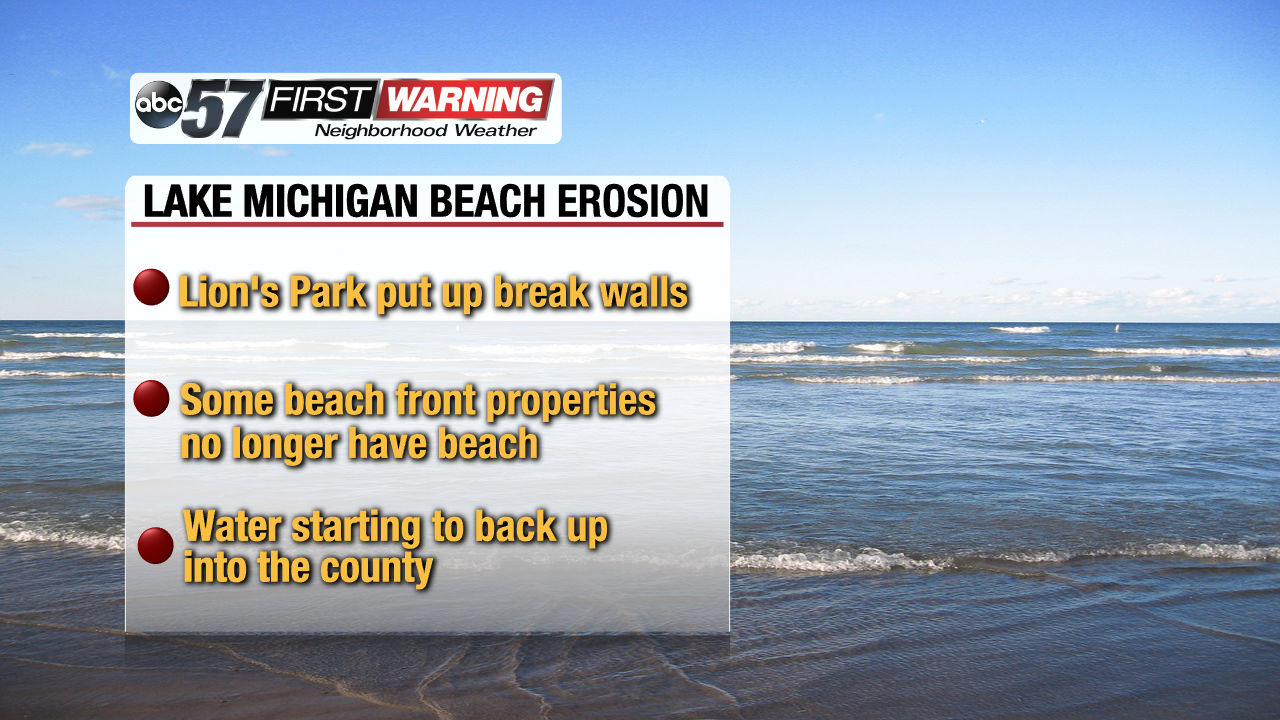 Problems are mounting as beach erosion continues. Beaches, both public and private, are disappearing and water is starting to back up from the lake deeper into Berrien County.

As a result, beach erosion has started to become a big problem along the lake shore in Berrien County. That slow process of rising and fluctuating water levels slowly eats away at the sandy dunes until there is nothing left. And all of this water is certainly creating some problems right along the lakeshore. Some of the beaches around Berrien County are starting to close as a result of the higher water. For example, Lion's Park in St. Joseph, just south of Silver Beach, has breakwalls in place to deter the rate of erosion. Some beachfront properties have their private beaches flooded or washed away entirely, and, this problem may not be going away any time soon. In fact, it may be growing. Due to the high water of Lake Michigan, everything is starting to back up through the rivers, creeks, and streams into the central portions of the county, according to the Berrien County Drain Commissioner.

Video of beach erosion problems around the Berrien County lake shore can be found here: