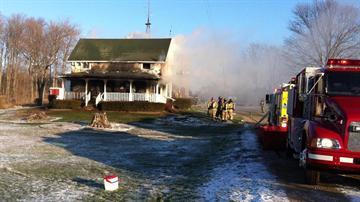 The raging fire off of Quinn Road sent smoke billowing out of the two story home.

Smoke from the fire stretched hundreds of feet in the air where it could be seen for miles.

"When the first truck arrived on the scene, the first floor of the house was on fire and it was extending up into the second story of the residence,” said Jason Casad, Assistant Chief of Lakeville Fire Department.

It was a familiar fire pattern.

Smoke poured out of the attic while firefighters looked on, unable to put out the flames until the roof caved in.

"It's just a waiting game now, we'll wait for it to go through the roof and then put the water on it, put it out that way,” said Casad.

Four hours later, after the structure finally gave way, firefighters had a way to get ahead of the fire.

"It's a stubborn fire. It's discouraging. The guys are in there working as hard as they can to try and get it to stop to minimize the damage, but sometimes it just doesn't work out that way for us,” said Casad.